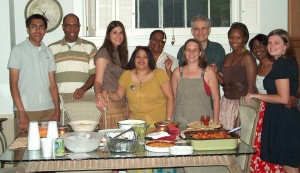 One of four thousand Obama houseparties across the nation was held at the home of Ms. Dawn Monteiro in Beaver Falls, PA.  Ms. Leanne Spearman, another local Obama organizer, made a brief welcoming speech. She said Senator Obama’s book “Dreams from My Father” and his famous speech at the 2004 Democratic Convention helped her decide to become part of the solution to our nation’s problems. She described Obama’s campaign as one that has empowered people by inspiring hope for a better future. Quoting Dr. Martin Luther King, Jr’s famous admonition she closed saying “I am a volunteer because of the ‘urgency of now.'”

The house party welcomed three Obama campaign staff workers who have moved to Beaver County. There was a lively discussion of the economic problems facing the working people of the district many of whom are “a paycheck away from poverty.” Many retirees find it difficult to make ends meet. All participants shared experiences talking to voters who are confused about their choice in November due to their feelings about race. The group made plans for voter registration at festivals, fairs, and other events through the summer. 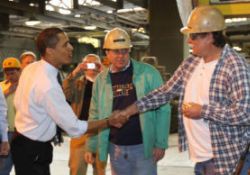 By John Nichols
The Nation

Democrats were clearly seen as running on an antiwar platform in 2006, and they won big, grabbing control of both houses of Congress.

The lesson should have been clear: when the party defines itself as antiwar, it wins.

But after a year and a half of wrangling between Congressional Democrats and the Bush Administration over Iraq, that definition has blurred. So now, even as Democrats are poised to nominate a candidate who opposed attacking Iraq, key Congressional supporters of the likely nominee, Senator Barack Obama, and his chief challenger, Senator Hillary Clinton, are working together to craft a platform that bluntly positions the Democrats as the party that will bring the troops home and change the policies that sent them to the Middle East. So far, fifty House members, all superdelegates, have signed a letter endorsing the antiwar language.

“On the issues of Iraq and foreign policy, Democrats can’t be vague or fuzzy,” argue Representatives Barbara Lee, an Obama backer; Jim McGovern, a Clinton backer; and Sam Farr, uncommitted until after the primaries, in an open letter to delegates to the Democratic National Convention. The “Democratic Platform that will be ratified at the Convention in Denver will form our core statement of principles as a party for the next four years, principles that we will unite around in both the general election and beyond,” they add. “With only months remaining before we unite as a party in August, it is critical that we take action now to ensure that a clear statement is made in our platform: we will end the war in Iraq; the Republican Party will not.”These influential superdelegates agreed, even while the presidential race divided them, to unite to support platform language that calls for: “an end to the war in Iraq by initiating the safe and secure withdrawal of all US combat forces, leaving no permanent military bases behind; a robust diplomatic surge in the Middle East and beyond that includes negotiations with the Iranian government without preconditions that make sitting down to talk impossible; an end to the use of torture and the closure of our prison at Guantánamo Bay.”

Party platforms are often dismissed as meaningless. But presidential candidates and Congressional leaders do not treat them as such, and neither should antiwar activists. In writing the platform the relationship between the candidate and the party base is defined, and the message for the fall campaign is framed. Four years ago, after Democratic convention delegates finalized an agenda for the party’s campaign, Representative Jesse Jackson Jr. dismissed it as “a cautious platform.” The chair of the party’s platform committee, Representative Rosa DeLauro, said simply, “It reflects John Kerry.” That was the problem. The platform’s “transparent vagaries on Iraq”–to quote antiwar activist Tom Hayden–signaled a tepid approach to the war debate that ceded vital ground to the Republicans. When Howard Dean and Dennis Kucinich supporters attempted to add antiwar language to the platform, Kerry’s man, former National Security Adviser Sandy Berger, rushed in to block them and bragged, “We didn’t give up anything.” Nor did they gain anything, as the results of that fall’s election demonstrated.

The House members who want strong antiwar language in this year’s platform aren’t trying to push Obama around; roughly half are Obama backers. Rather, they suggest, they are prodding the party to do what is necessary to prevail in November. “The Democratic Party needs this,” says Barbara Lee. “It will give the nominee the foundation and the [appeal to the] base to move forward and win.”

Will the platform process be flexible enough to accept what these superdelegates are offering? Perhaps. The closeness of this year’s nominating contest and the fact that the process will be led by backers of Obama, Clinton and John Edwards guarantees a more diverse platform committee, one that will be disinclined to rubber-stamp cautious language produced by consultants. The Win Without War coalition is mounting a campaign to get superdelegates to back the antiwar planks–and it will deliver petitions supporting it to regional platform hearings this summer and at the convention–while Progressive Democrats of America is working closely with Jim McGovern, who is likely to emerge as an outspoken grassroots supporter of the move. Says McGovern of the Democrats, “We need to demonstrate that we get it, and the platform is the place to do that.”

[John Nichols, a pioneering political blogger, has written The Beat since 1999. His posts have been circulated internationally, quoted in numerous books and mentioned in debates on the floor of Congress. Nichols writes about politics for The Nation magazine as its Washington correspondent. He is a contributing writer for The Progressive and In These Times and the associate editor of the Capital Times, the daily newspaper in Madison, Wisconsin. His articles have appeared in the New York Times, Chicago Tribune and dozens of other newspapers.]