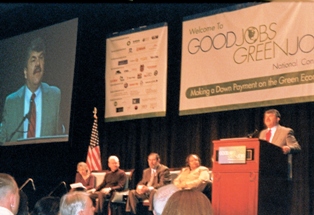 When you walk into a large and stately Washington, DC hotel lobby and find it teeming with thousands of smiling, buzzing people-half in labor union jackets and ball caps, the other half dressed in 30-something hip-hop causal-you know some special is happening.

This was the lively, energized scene for three cold wintry days this Feb 4-6 at the Marriott Wardman Park Hotel, as nearly 3000 activists and organizers gathered for the “Good Jobs, Green Jobs” National Conference. The gathering was convened by more than 100 organizations, representing every major trade union and every major environmental group in the country, among others. END_OF_DOCUMENT_TOKEN_TO_BE_REPLACED

Allegheny Lock and
Dam #6 on the Verge
of Catastrophic Failure

The Ohio River and its tributaries, the Allegheny River and the Monongahela River are the artery of commerce to the Port of Pittsburgh, the second largest inland port of the United States. Due to years of negligence and underfunding of our infrastructure this navigation system is on the verge of catastrophic failure. The Army Corps of Engineers press release linked here

states in the calmest language possible that we face a potential social, economic, and ecological disaster due to the critical disrepair of the locks and dams that make the rivers navigable. A dam failure would flood thousands of acres, starve water and sanitation facilities, and halt navigation. Most economic activity in the region will shut down, including the Pittsburgh International Airport and steel and cement production. The region would experience shortages of gasoline and basic foodstuff. Twelve coal fired electric power plants would face shutdown due to the halt of coal shipments on the rivers.
END_OF_DOCUMENT_TOKEN_TO_BE_REPLACED 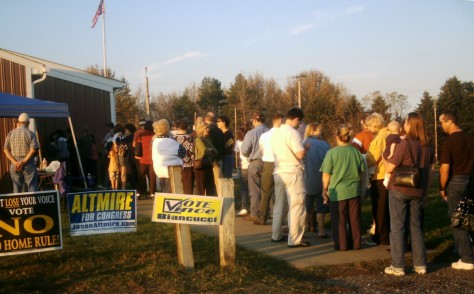 There was a lot more to working the polls in this historic election than checking signatures and passing out palm cards.

It was glorious Fall day at the semi-rural fire-hall-turned-voting-center in Raccoon Township, Beaver County, Western PA. I arrived early, but the hall was packed. Most people were in good spirits. Long-time neighbors chatted, older folks marveled at the uncommon turnout among younger voters, and parents worried about fretful children. The main buzz was about one thing: whether they were for Obama or against him, everyone knew they were about to make history. 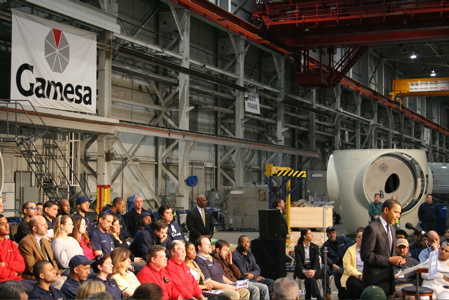 Sept. 12, 2008-Pittsburgh – Add “green jobs” to all the other campaigns traversing the country this fall, thanks to the Steel Workers, plus environmental groups.

The campaign, in six states – Pennsylvania, Wisconsin, Ohio, New York, Missouri, Tennessee, and Minnesota – is based on a Sept. 9 report showing $100 billion invested in green technology has the potential to create 2 million new jobs in the next two years, advocates said. That’s four times as many jobs as the same dollars would create in the oil industry, it adds.