The weekly vigil for peace observed Independence Day at the Beaver County Courthouse on Saturday from 1:00pm to 2:00pm. The five year long witness against war happens every Saturday and all are welcome.

I want to take a little opinion poll.

If you think America ought to keep going in the same direction George Bush and Dick Cheney have been taking us in stand up.

(Well, I’m going to cut some of you guys in the aisle a break and assume you didn’t understand the question.)

Well, congratulations — you just answered the question that’s stumped all the commentators and columnists and consultants in Washington, D.C. who are asking how Barack Obama is going to win the votes of workers in states like Ohio, Michigan, Indiana, West Virginia and Pennsylvania. END_OF_DOCUMENT_TOKEN_TO_BE_REPLACED 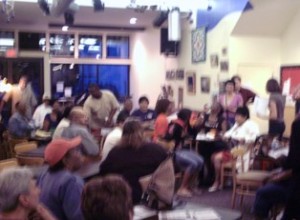 Organizing for
Obama in a
Hard-hit Steel Town

By Carl Davidson
Progressives for Obama

You knew something special was happening when the youngest, freshest face in the room got up, took charge and called the meeting to order-“Hello, I’m Scout Sanders, and welcome to the first meeting of Aliquippa for Obama!’

Sanders was a full-time Obama volunteer, a student from the University of Connecticut, and her bright smile and enthusiasm brightened up a room of about 30 residents of Aliquippa and a few other nearby towns. Those who came were all ages, from young teenagers to retired workers in their seventies, a little more than half were African American, about two-thirds were women.

Aliquippa is a severely stressed milltown in Beaver County, Western Pennsylvania. At one time nearly 30,000 people lived here, mostly steelworkers and their families. Now it’s down to 12,000, with 6000 low-income African-Americans hanging on in the central area, with the white workers living in the border neighborhoods. The home of Mike Ditka, Tony Dorsett, and other great athletes, it’s a tough, no-nonsense place in dire need of a hopeful future. The meeting was in a bright and well-cared-for church-run coffee house, Uncommon Grounds, on the mostly boarded up main street. END_OF_DOCUMENT_TOKEN_TO_BE_REPLACED