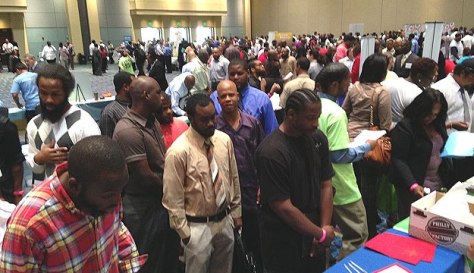 May 27, 2017 – State officials and community groups are trying to reduce employment hurdles for Pennsylvania’s former convicts, but finding work remains a struggle for ex-prisoners long after their release from incarceration.

Pittsburgh and Philadelphia have similar fair-chance hiring practices enshrined in city ordinances. And while such initiatives don’t forbid candidate criminal background checks, they can give job seekers a chance to make their case to employers instead of being automatically weeded out of a candidate pool.

“Process matters,” said Beth Avery, a staff attorney with the National Employment Law Project. “If (an employer) knows from step one that a person has a record, that’s going to color their interaction. … It’s going to affect their assessment of a person.”

Nearly 20,000 inmates were released from Pennsylvania prisons in 2016, according to the Department of Corrections. Almost 17,000 were paroled, while 3,000 were released after completing their sentences.

Former convicts looking for work can do a few things to try to make the search easier, according to a report by Community Legal Services of Philadelphia. They can try to persuade employers to seek bonds against an often-perceived risk of theft. They can try to enforce a state law that allows employers to consider felony or misdemeanor convictions “only to the extent to which they relate to the applicant’s suitability for employment,” though that often requires a lawsuit.

They also can try to clean up their criminal records through expungements or pardons, although those options are limited in Pennsylvania.

“Most likely, they do not know of or cannot utilize any of these options, and their only alternatives are long, dogged and often repetitive job searches, work in the underground economy or a return to committing crimes,” the report states.

May 25, 2017 – There’s broad agreement across our country, and across party lines, that we need more good jobs and that we need to rebuild our nation’s crumbling infrastructure.

But that’s where the agreement ends. The answers to how we do that, what we build, where we build and who gets the jobs couldn’t be more different.

One plan will move us backwards – deepening the climate crisis, income and wealth inequality, make our neighborhoods more toxic and more vulnerable.

The other takes on the challenges of a warming planet and toxic neighborhoods head on by investing in repairing and replacing deteriorating infrastructure. This creates good, living wage jobs communities where they’re needed most and empowers our communities to build the new green, climate-change ready and just economy that finally works for all of us, not just the wealthy few.

At its core, the fight over how we deal with infrastructure is about environmental justice. It is about whether or not black and brown people, Native people and working class people of all races have the same right to clean air, clean water, well-maintained neighborhoods and a livable climate as the one percent.

This week, Trump put out an anti-people, anti-planet budget plan that shows us what his answer to that question is. Trump and his friends on Wall Street and the energy companies are crafting an infrastructure plan that will:

Give taxpayer dollars to corporations to build privately owned toll-roads in wealthy suburbs and cities.

Sell off our airports and let corporations charge us more fees to use them.

Sell off our water and energy utilities and loosen regulations on safety, making a bad situation worse.

Sell our public parks to oil companies to drill and then let them build more pipelines through sacred lands.

Gut the rules on environmental protections and those that require a living wage for workers.

The Trump infrastructure bill is an attack on our lives, our communities, our future and our planet. We can either let him do this to us or we can stand up and fight back for our lives, our people and our environment. We know what our choice will be.

We at People’s Action have a much different plan. Working with directly impacted communities across the country from Rust Belt cities, to small farms, to the Big Apple, to Indian Country, we’ve created a People and Planet First vision of what it means to really fix our infrastructure.