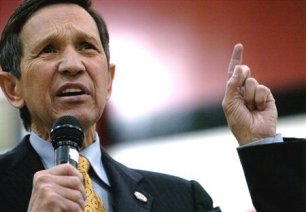 WASHINGTON – Congressman Dennis Kucinich (D-OH) today made the following statement on the floor of the House concerning an expected vote on a $33 billion supplemental war funding bill:

“In a little more than a year the United States flew $12 billion in cash to Iraq, much of it in $100 bills, shrink wrapped and loaded onto pallets. Vanity Fair reported in 2004 that `at least $9 billion’ of the cash had `gone missing, unaccounted for.’ $9 billion.

“Today, we learned that suitcases of $3 billion in cash have openly moved through the Kabul airport. One U.S. official quoted by the Wall Street Journal said, `A lot of this looks like our tax dollars being stolen.’ $3 billion.  Consider this as the American people sweat out an extension of unemployment benefits.

“Last week, the BBC reported that “the US military has been giving tens of millions of dollars to Afghan security firms who are funneling the money to warlords.” Add to that a corrupt Afghan government underwritten by the lives of our troops.

“And now reports indicate that Congress is preparing to attach $10 billion in state education funding to a $33 billion spending bill to keep the war going.

“Back home millions of Americans are out of work, losing their homes, losing their savings, their pensions, and their retirement security.  We are losing our nation to lies about the necessity of war.

“Bring our troops home. End the war. Secure our economy.”

WASHINGTON (PAI) – The Steelworkers union and the American Wind Energy Association have signed an agreement on working together to develop the wind power industry, emphasizing the need for alternative energy devices – windmills and wind turbines generating electricity – produced by U.S. workers in U.S. factories.

Key parts of the pact include lobbying for a national standard ordering U.S. utilities to purchase a set percentage of their power from renewable sources – wind, solar, hydro, etc. – and for tax incentives to ensure the parts for the wind turbines and associated power plants and transmission lines are manufactured here, not overseas.

“We expect this framework will help advance the promise of green jobs being key to our future. The nation cannot continue to fall behind other countries on clean energy manufacturing,” said Steelworkers President Leo Gerard.

END_OF_DOCUMENT_TOKEN_TO_BE_REPLACED

For insubordination, for disrespecting the Office of the President of the United States and for allowing derision of the White House among his staff, General Stanley McChrystal must resign.

McChrystal has been summoned from Afghanistan to explain derisive comments and insubordination detailed in a new Rolling Stone article by Michael Hastings. As detailed in the article, the general and his staff were clearly disrespectful of the office of the president, as well as contemptuous of the civilian leadership of our country. McChrystal’s behavior and his toleration of similar behavior from his staff breeds an attitude of contempt for civilian leadership among his officers, and no Commander-in-Chief should tolerate it. McChrystal should resign, and the president should accept his resignation.

In the article, McChrystal and his aides heap derision on National Security Advisor Jim Jones (a “clown,”), Vice President Joe Biden (“Bite me,”), and the President of the United States, Barack Obama.

When shown the article prior to it’s publication, McChrystal didn’t push back:

Eric Bates, the magazine’s editor, said during an interview on MSNBC’s “Morning Joe” that McChrystal saw the piece prior to its publication as part of Rolling Stone’s standard fact-checking process – and that the general did not object to or dispute any of the reporting.

My friend, Michael Cohen, cites the United States Code of Military Justice to show how cut-and-dry this decision should be:

General McChrystal, his staff, and his friends over at the Center for a New American Security (CNAS) have tried to manhandle this president from the beginning. They’ve played media games to try to force the president’s hand on the most recent troop increase in Afghanistan. Now they’ve been clearly insubordinate, clearly contemptuous of the civilian leadership of this country. He’s corroded respect for the chain of command and for civilian control of the military. He must resign.

If the president wants to preserve a strong White House for the next president, he has to accept the resignation.

Sign our petition calling for McChrystal’s resignation. We’ll send it to the Pentagon and the White House when McChrystal shows up to explain himself.

The rumor mills in DC are spinning the story that White House Budget Director Peter Orszag will be resigning. This is welcome news. Orszag is an apostle of Robert Rubin, the Goldman Sachs executive and a key neo-liberal leader.
In the debate on healthcare and general government spending, Orszag has been the point man for the “deficit fetishists.” They say the cost of programs is more important than their beneficial social and economic effects, excluding of course BTW (Bank bailouts, Tax cuts for rich, and War).
The deficit fetishists are mobilizing their vast networks of “leaders” and media to orchestrate a campaign to convince the public that the government must renege on its obligations to payout the medicare and social security funds to beneficiaries.
They are already strong enough in the Senate to block extension of unemployment compensation, COBRA health subsidies, emergency funds to help hard hit state budgets, and maintaining Medicare doctor compensation.
This victory of the neo-liberals in the Senate, which consist of the Blue Dog Democrats and all the Republicans will have dire consequences for millions of Americans out of work or currently working as firemen, police, teachers, counselors, and in maintenance. It will also push the economy to the verge of another crisis, or double dip.
Obama must push these neoliberals out of his administration and bring in the reborn Keynesians, who believe that spending is the way out of the crisis. Americans need to get back to work. Over 15 million are jobless and producing no value to support the economy. Axing Orsag is a step in the right direction.

Some twenty concerned voters gathered at Cong. Jason Altmire’s Aliquppa, PA office at noon on June 16th for a Healthcare not Warfare vigil. The action was sponsored by Progressive Democrats of America and was held at the same time at over 100 Congressional offices across the country.

END_OF_DOCUMENT_TOKEN_TO_BE_REPLACED

The Blue Dogs are using the banker created deficit as their excuse to cut critical programs that will keep workers alive and well. Blue Dog Altmire needs to hear from the voters.

In setting up his National Commission on Fiscal Responsibility and Reform, Barack Obama is again playing coy in public, but his intentions are widely understood among Washington insiders. The president intends to offer Social Security as a sacrificial lamb to entice conservative deficit hawks into a grand bipartisan compromise in which Democrats agree to cut Social Security benefits for future retirees while Republicans accede to significant tax increases to reduce government red ink.

Obama’s commission is the vehicle created to achieve this deal. He ducks questions about his preferences, saying only that “everything has to be on the table.” But White House lieutenants are privately talking up a bargain along those lines. They are telling anxious liberals to trust the president to make only moderate cuts. Better to have Democrats cut Social Security, Obama advisers say, than leave the task to bloodthirsty Republicans.

END_OF_DOCUMENT_TOKEN_TO_BE_REPLACED

The Democratic Party and Blanche Lincoln

The run-off between Democratic Senate incumbent Blanche Lincoln and challenger Bill Halter, which culminated on Tuesday night in Lincoln’s narrow victory, brightly illuminates what the Democratic Party establishment is. Lincoln is supposedly one of those “centrist”/conservative/corporatist Senators who thwarts the good-hearted progressive agenda of the President and the Party. She repeatedly joined with Republicans to support the extremist Bush/Cheney Terrorism agenda(from the the Protect America Act to the Iraq War and virtually everything in between), serves the corporate interests that run Washington as loyally as any member of Congress, and even threatened to join the GOP in filibustering health care reform if it contained the public option which Obama claimed he wanted. Obama loyalists constantly point to the Blanche Lincolns of the world to justify why the Party scorns the values of their voters: Obama can’t do anything about these bad Democratic Senators; it’s not his fault if he doesn’t have the votes, they insist.

END_OF_DOCUMENT_TOKEN_TO_BE_REPLACED

Vigil to save Medicare and Social Security

In the months since our first vigil the attacks on progressive values and the principles of democracy, equality, and fairness have escalated dramatically.

Whether the “haves” have been emboldened by the Supreme Court’s Citizens United decision or this is simply one more step to create an even greater gap between the rich and the rest of us, the machine is moving forward to make significant cuts in Medicare and Social Security to “restore fiscal balance.”

As progressives, we know that the better way toward fiscal stability is to stop spending money on unwinnable, expansionist-driven wars. But in the bubble of Washington, President Obama, Congress—Republicans and Democrats—and the media are expending a lot of energy—and money—on convincing Americans that cutting great, gaping holes into our social safety net will be good for the country.

July 30, 2010, will be the 45th anniversary of Medicare’s being signed into law, but without our action, Medicare, Medicaid, and Social Security as we know them may not survive that long.

Tell Congressman Altmire: “Hands off our Social Security and Medicare.”