Thanks to IBEW member Bob Schmetzer for this Article

Q. Why is handing out hundreds of billions of dollars in taxpayer funds OK if the recipients are Wall Street corporations but not OK if they are Midwest automakers?

A. Automakers are unionized.

As discussion about the Detroit auto industry’s requests for a bridge loan roils throughout the media, a strikingly class-based argument has emerged by Republican ideologists, Big Business apologists and others who oppose saving America’s automakers.

Here’s [1] The Jed Report’s take on one such example, that of Republican Rep. Zack Wamp, who seems to have forgotten that his own health care, retirement benefits and other “legacy” perks are paid for by U.S. taxpayers:
END_OF_DOCUMENT_TOKEN_TO_BE_REPLACED

November 22, 2008 – No presidential administration keeps its promises without relentless pressure from below. It’s never happened before, and there’s no reason to expect any different. The popular demand for jobs, peace and justice are the concrete “change” Democratic voters believe in, and what swept Obama and his party to power. The self-made crisis of the US auto industry is the perfect opportunity to make good on two of those promises. It’s not just the first test of whether an Obama administration intends to serve its voters or its wealthy corporate campaign contributors. It’s the first test of whether Obama’s popular base can or will hold the new president and his party accountable for producing the “change” they promised.
END_OF_DOCUMENT_TOKEN_TO_BE_REPLACED

November 15, 2008, Washington, DC – With Barack Obama about to assume the presidency and take up the healthcare issue, leaders of single-payer healthcare organizations met for two days, November 11 – 12, at the AFL-CIO headquarters in Washington, D.C. The California Nurses Association/National Nurses Organizing Committee (CNA/NNOC), Physicians for a National Health Plan (PNHP), Healthcare-NOW! , and Progressive Democrats of America (PDA) convened the meeting. Providing healthcare to the millions of Americans who lack it was a centerpiece of the presidential campaigns.

Approximately sixty people representing over a dozen organizations and three members of Congress were in attendance. The agenda included a political overview, developing a legislative strategy, and alliance-building discussions. Among the represented groups were Healthcare-NOW!, the AFL-CIO, All Unions Committee for Single-Payer, American Medical Students Association, Rep. John Conyers, and aides from the offices of Sen. Bernie Sanders and Rep. Dennis Kucinich.

There was broad agreement among the participants that a single-payer healthcare plan, H.R. 676 specifically, is not only the solution to solving the problem of providing healthcare to every American, but is also a sensible part of any economic stimulus package and lasting economic recovery.
END_OF_DOCUMENT_TOKEN_TO_BE_REPLACED

This coming year, our 4th C.D. Chapter of PDA plans to participate in the national Win-Win campaign sponsored by Healthcare NOW, the national coalition backing HR676.

Join us in this new campaign to win endorsements of HR 676 – Medicare for All by local governments – counties, boroughs, townships, and school boards. In a time of fiscal crisis for local governments, saving over 50% of healthcare outlays and getting more healthcare in return is a win-win outcome for taxpayers, employees, and employers.

The employer payroll tax for health coverage under HR676 is considerably less than current local government outlays for health insurance. This is due to the $30 billion savings from eliminating private insurance companies from healthcare. HR 676 means big savings for taxpayers. Also, private and public employees will see an end to co-pays, premiums, and deductibles. And it means expanded healthcare coverage for everyone. See the Charts below:
END_OF_DOCUMENT_TOKEN_TO_BE_REPLACED

Thanks to the thousands of union members and volunteers who gave up countless evenings and weekends to help elect Barack Obama President by an impressive 11 – point margin. Now we enter the next phase of our campaign to Turn Around America with the passage of the Employee Free Choice Act. I look forward to continuing our work together and hope to see you all, across the State.

Heading into the holiday season, CLC Presidents and ALF Chairs look back on our victory on November 4th when the labor movement came out in record numbers to be the difference in Pennsylvania and Barack Obama and other AFL-CIO endorsed candidates. It is important to remember that election day was just the beginning and that now that we have a president elect who will sign the Employee Free Choice Act into law the real work starts:

“The election results on November 4th were a great success for the labor movement,” said Dave Antle, Northeast Area Labor Federation Chair and AFSCME District Council 87 Director.  “On a local level we re-elected Congressman Kanjorski and Congressman Carney, and on the national level we elected Barack Obama, a president who will sign The Employee Free Choice Act to law when it reaches his desk.  This is all thanks to the hard work of union members and their families who volunteered with the Labor 2008 program.  Because you were out talking to your fellow union members on labor walks, over the phone at member phone banks, through local union mail and at the work place with leaflets we were able to get our message out to working families and elect candidates that care about our issues.  Though our work is far from over, on November 4th we came together as a movement and made the first step in turning America around by voting for our own interests and electing Barack Obama as the next President of the United States.”
END_OF_DOCUMENT_TOKEN_TO_BE_REPLACED

Portland, Oregon.   Teamster Local 206, which represents workers in a
variety of occupations through out the state of Oregon, has endorsed HR
676, single payer healthcare legislation introduced by Congressman John
Conyers (D-MI).

Tom Leedham, Local 206 Secretary-Treasurer said: “Members of our union are
very involved in health care and have studied a number of proposals for
reform both at the state and national levels.  Health care and health care
issues are often the subject of discussion at our general and contract
ratification meetings.  Because we enjoy a high quality schedule of
benefits we are not inclined to support a proposal that would be a
reduction in benefits or an increase in costs for 206 Teamsters.  A
national single payer plan like HR 676 is the only program we see that
meets our quality and cost criteria.  HR 676, like no other, is consistent
with our union’s overall philosophy: ‘everybody in, nobody out’.

Rivers of Green:
The new administration must
fix locks and dams
Pittsburgh Post-Gazette

Pittsburgh owes its existence to its rivers, which first served as roads through the wilderness. To this day, the city’s economic fortunes are still linked to river traffic — this is the second-largest inland port in the United States.

Those barges plying our three rivers require an efficient, reliable system of locks and dams, which, in the region’s best interest, should be kept in good repair. As it happens, this is also in the nation’s interest. As he sets his national agenda, it is vital that President-elect Barack Obama keep this in mind because the system is under severe strain.

END_OF_DOCUMENT_TOKEN_TO_BE_REPLACED

“As the region’s federal engineer, it is my responsibility to report that the Lower Mon Project is facing a perfect storm. Inefficient funding; the insolvency of the IWTF; an aging and crumbling infrastructure; an increase in unscheduled, unexpected repairs; and a flat-lined operations and maintenance budget coupled with rising costs…threaten the reliability of the sytem.” – Colonel Michael P. Crall, U.S. Army Corps of Engineers, July 3, 2008

Our new President and Congress need to act with urgency to address the critical state of this artery of the regional economy. Don’t watch the slow motion wreck. Take action to get the word out and up the chain to Washington! The US Army Corps of Engineers is not a lobbying organization. The people of western Pennsylvania must lobby for their share of any new funds allocated to infrastructure upgrading.

Click on this link gx-dam-jl-10-26 to view a map of the US Army Corps of Engineers Pittsburgh District facilities. See the location of the fourteen of twenty-three locks and dams that are rated at high risk of breakdown.

For more information read the US Army Corps of Engineers Pittsburgh District 2008 State of the Infrastructure report at this link corpsinfrastructure.

Click on this link comparetransport-modes to view a graphic comparison of river, rail, and ground transport efficiency.

Email this to a friend

Allegheny Lock and
Dam #6 on the Verge
of Catastrophic Failure

The Ohio River and its tributaries, the Allegheny River and the Monongahela River are the artery of commerce to the Port of Pittsburgh, the second largest inland port of the United States. Due to years of negligence and underfunding of our infrastructure this navigation system is on the verge of catastrophic failure. The Army Corps of Engineers press release linked here

states in the calmest language possible that we face a potential social, economic, and ecological disaster due to the critical disrepair of the locks and dams that make the rivers navigable. A dam failure would flood thousands of acres, starve water and sanitation facilities, and halt navigation. Most economic activity in the region will shut down, including the Pittsburgh International Airport and steel and cement production. The region would experience shortages of gasoline and basic foodstuff. Twelve coal fired electric power plants would face shutdown due to the halt of coal shipments on the rivers.
END_OF_DOCUMENT_TOKEN_TO_BE_REPLACED 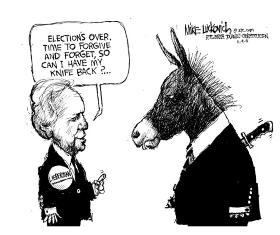 Please join me to urge the Democratic Party Senate leaders to strip Sen. Joe Lieberman, who campaigned for war and austerity with McCain, of all and any leadership positions with the majority Democratic caucus.

I just signed this petition to the members of the Senate Democratic Steering and Outreach Committee, who now determine Joe Lieberman’s fate as Chairman of the Homeland Security and Governmental Affairs Committee.

Harry Reid has told Lieberman that he has to go, but Joe is now openly threatening the caucus.  Please sign this petition and let them know that Lieberman must go, once and for all.

After you sign the petition please send your friends the link to this site.

Email this to a friend

NetworkedBlogs
Beaver County Blue: Voice of the 17th CD of Progressive Democrats of America
Blog at WordPress.com.
%d bloggers like this: