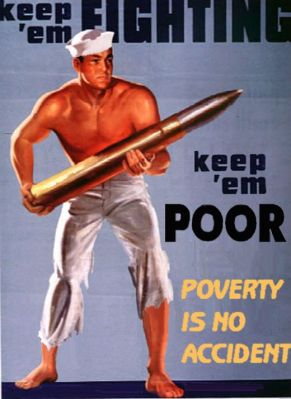 Siobhan Kolar can’t believe that thousands of jobs, including her own with an unemployment advocacy nonprofit called Chicago Jobs with Justice, are on the Senate’s fiscal chopping block.

“They’re completely not tuned in and not connected. They’re totally out of touch with what’s going on,” said Kolar, 42, in an interview with Huffpost. Most of Kolar’s $14 per hour salary comes from an Emergency Fund created to subsidize jobs through the Temporary Assistance for Needy Families program (formerly known as welfare).

The Emergency Fund, a $5 billion product of the stimulus bill, created some 240,000 jobs in 37 states and is all set to expire on Thursday. The Senate has rejected several opportunities to extend the program for another year at a cost of $1.5 billion — too much for deficit hawks to spare.

But jobs created by the Put Illinois to Work program have been granted a stay of execution: Illinois governor Pat Quinn announced Tuesday that he would extend the program in Illinois for an additional two months (though it was not immediately clear how the extension would be funded).

“The best way to make our economy stronger is to put people to work — that is why we are temporarily continuing this successful program until Congress acts to extend the program,” Quinn said in a statement. “We cannot afford to lose momentum as we continue our economic recovery. Quick action by Congress will keep thousands of people at work in Illinois and will continue to build on the progress we have already made.”

In Illinois, the program has put an 26,000 people to work, according to the Center on Budget and Policy Priorities, which estimated that the fund created more than 240,000 jobs nationwide. The program is even popular with some conservatives, such as Mississippi Republican Gov. Haley Barbour, but since summer the Senate has gridlocked repeatedly over deficit spending. Despite Quinn’s hopes, there’s no indication that the Senate will take up the fund in December after it allows it to lapse as expected this week.

END_OF_DOCUMENT_TOKEN_TO_BE_REPLACED

Mass Arrests in DC: We Shall No Longer Be Crucified Upon the Cross of Coal

Author, “Reckoning at Eagle Creek: The Secret Legacy of Coal in the Heartland”

Over one hundred protesters from the Appalachian coalfields were arrested in front of the White House today, defiantly calling on the Obama administration to abolish mountaintop removal mining. As part of the Appalachia Rising events, the coalfield residents took part in a multi-day series of events to bring the escalating human rights, environmental and health care crisis to the nation’s capitol.

Kentuckians for the Commonwealth leaders Teri Blanton and Mickey McCoy, the first arrested in today’s nonviolent act of civil disobedience, were joined by allies from around the country, including NASA climatologist James Hansen. Meanwhile,protesters led by the legendary Rev. Billy Talen staged a nearby sit-in at the office of the PNC bank, which remains one of the last major financiers of coal companies engaged in this extreme form of strip-mining in Appalachia.

END_OF_DOCUMENT_TOKEN_TO_BE_REPLACED

I met with the PA  15th Legislative District State Representative on Tuesday Sept. 21st in Harrisburg and on Friday Sept. 24th in Monaca. I presented him with information about the effect of Marcellus shale drilling on our area.

I asked if my name was on the PA Homeland Security list. I read that attendees of the Marcellus Shale informational breakfast in Georgetown were listed. I wanted my name removed.  He said he had other names removed in the past. He didn’t say if it was listed or not.

I spoke about the well in Marion Township, Beaver County.  My wife and I went past in the truck and got a mouth full of the burn-off fumes from the stack. The fire raged about 50 feet over to the trees along the field. It took about a half hour for the sandy foul taste and uneasy feeling to clear out of our mouths, throats and lungs.

Rep. Christiana argued that none of the residents complained. He could care less about us, nor showed any compassion. I told him of my concerns about the deadly volatile chemicals that were being used, both in the earth and on top. He said the industry is very careful not to spill any of the frack fluid. “But accidents will happen, so what?” was the attitude.

I asked about the fish kills around the state. He assured me that a fishing group from the Susquehanna River said the fish are fine. I asked the name of the club. He stumbled and floundered and could not come up with a name. Earlier I had spoken to a member of the PA Fish Commission. He told me that the Monongahela River was the best Musky fishing in the USA. Now, they are all dead because of the recent water pollution from disposing partially treated fracking mud into the river.

I asked Rep. Christiana about the Impact Fee on gas drillers. He called it a severance Tax and blamed the Democrats for the budget problems. I said I had spoken to the fish commissioner who told me that their only income is through License fees and Federal Excise tax. That the fish commission is depleting its resources dealing with drilling and problems with water and fish kills. There is no help from the state.

Representative Christiana said that the fish commission doesn’t need to be out there. I suppose if no reports are written, then nothing happened. I told him that I was a life member of Trout Unlimited, and we have been cleaning up Pennsylvania streams for 50 years from the last ecological disaster. He noted that we are still cleaning the streams up.

I then said that I am a life member of the Viet-Nam Veterans and that I would never believe my government again that the chemicals won’t hurt me! This brought him to silence. So I left and he said he didn’t think he had my vote. I smiled.

Now lets go to work to replace him. He misrepresents the 15th legislative district. Any help and all help would be greatly appreciated.

The protest movement has been a big test for Sarkozy, who, like other European leaders, has struggled to convince his country of the need for cost-cutting and scaling back generous social benefits after the Greek debt crisis scared markets and sapped confidence in the entire 16-nation euro currency.

France’s powerful unions consider retirement at 60 to be a near-sacred right, and more than 230 demonstrations stretched from the southern port city of Marseille to Lille in the north. Some protesters carried signs demanding early retirement for Sarkozy, whose dismal approval ratings hover in the mid-30s.

END_OF_DOCUMENT_TOKEN_TO_BE_REPLACED

Can The Jobless Become A Political Force?

Labor activists are hoping the nation’s nearly 15 million unemployed can be a political force in the upcoming midterm elections.

“We’re convinced that the jobless, the unemployed, are the swing vote of the 2010 midterms and if they know who their tormentors are, they will swing really hard left,” said Rick Sloan in an interview with HuffPost. To that end, Sloan, who is a spokesman for the International Association of Machinists, started a “Union of Unemployed” with a website that he says gets 35,000 visitors a month. He created a web ad and is organizing a pre-rally for unemployed folks before the One Nation Working Together rally on Oct. 2.

“These folks are registered and, for a great number of them they were the surge voters of 2008,” he said. “They were younger, they were black, they were Latino, they were blue-collar without high school, and they were college educated. That’s what the demographics of the Obama surge vote looked like. And they have suffered disproportionately in this recession.”

END_OF_DOCUMENT_TOKEN_TO_BE_REPLACED

Anger is sweeping America. True, this white-hot rage is a minority phenomenon, not something that characterizes most of our fellow citizens. But the angry minority is angry indeed, consisting of people who feel that things to which they are entitled are being taken away. And they’re out for revenge.

These are terrible times for many people in this country. Poverty, especially acute poverty, has soared in the economic slump; millions of people have lost their homes. Young people can’t find jobs; laid-off 50-somethings fear that they’ll never work again.

Yet if you want to find real political rage — the kind of rage that makes people compare President Obama to Hitler, or accuse him of treason — you won’t find it among these suffering Americans. You’ll find it instead among the very privileged, people who don’t have to worry about losing their jobs, their homes, or their health insurance, but who are outraged, outraged, at the thought of paying modestly higher taxes.

END_OF_DOCUMENT_TOKEN_TO_BE_REPLACED

Official estimates by the Census Bureau showing a dramatic spike of 4.3 million in the number of Americans without health insurance in 2009 – to a record 50.7 million – underscore the urgency of going beyond the Obama administration’s new health law and swiftly implementing a single-payer, improved Medicare-for-all program, according to Physicians for a National Health Program, a 17,000-member physician group.

The Census Bureau reported that 16.7 percent of the population lacked health insurance coverage in 2009, up from 15.4 percent in 2008, when 46.3 million were uninsured.

END_OF_DOCUMENT_TOKEN_TO_BE_REPLACED

A Princeton University research team has demonstrated that all sweeteners are not equal when it comes to weight gain: Rats with access to high-fructose corn syrup gained significantly more weight than those with access to table sugar, even when their overall caloric intake was the same.

In addition to causing significant weight gain in lab animals, long-term consumption of high-fructose corn syrup also led to abnormal increases in body fat, especially in the abdomen, and a rise in circulating blood fats called triglycerides. The researchers say the work sheds light on the factors contributing to obesity trends in the United States.