The Deep Horizons ultra-deepwater dynamic positioned semi-submersible oil drilling rig, lying upside down a mile below sea level, was built and owned by Transocean Limited of Vernier, Switzerland. This rig was the most technologically advanced drilling machine on earth, designed to tap oil reserves miles below the ocean’s surface. It was completed in 2001 by Hyundai Heavy Industries in Ulsan, South Korea. British Petroleum was leasing the rig at a cost of one-half million dollars per day to exploit oil and gas trapped under tremendous pressure miles below.

Just as Secretary of Defense Robert McNamara thought that advanced technology would allow U.S. weaponry to defeat the people of Vietnam in the 1970s, the Wall Street banks now believe that current ‘advanced technology’ will allow them to tap unknown forces of nature…at a profit.

They justify this endeavor with the argument that exploiting natural resources always involves some endemic risk and that they are insured to protect their investors. Wall Street and their oil industry allies believe that, as in the past, disasters are a cost of business and that once the cleanup is done there will be a return to profitability.

Profits from deepwater drilling, as well as the fracking of the Marcellus shale in Pennsylvania and New York, are projected to be enormous, to create dazzling new fortunes for those who are bold, hardy, and carefree enough to get there first. These expectations of great wealth from expensive and refractory resources are based on the knowledge that the world, but especially the United States, is rapidly using up, and to a great degree wasting, petroleum and gas reserves. As the reserves shrink and become more expensive to exploit, the push to find and exploit them intensifies.

END_OF_DOCUMENT_TOKEN_TO_BE_REPLACED

WASHINGTON — Seizing on the oil rig explosion in the Gulf of Mexico, Sen. Bill Nelson asked Monday for a rare joint Senate committee investigation into safety claims made by the oil industry.

The request — made along with New Jersey Democratic Sens. Frank Lautenberg and Bob Menendez, who like Nelson oppose oil and gas drilling off their states’ coast — comes as authorities monitored the Gulf spill and tried to use underwater equipment to cap the leak.

END_OF_DOCUMENT_TOKEN_TO_BE_REPLACED

A somber yet passionate President Barack Obama was enthusiastically cheered for his eulogy here Sunday in which he honored the 29 coal miners killed in the Upper Big Branch mine explosion on April 5 and vowed to try to prevent such a tragedy from happening again.

“These miners lived and died in pursuit of the American dream. … We cannot bring back those 29 miners we lost. They are with the Lord in heaven.

“Our task here on earth is to keep lives from being lost again,” Mr. Obama said during his 15-minute eulogy at the “Hope and Healing” memorial service held in the Beckley-Raleigh County Convention Center.

END_OF_DOCUMENT_TOKEN_TO_BE_REPLACED

A lawyer offers sample laws to Back Mountain towns concerned about drilling.

DALLAS TWP. – The Back Mountain Community Partnership was advised Thursday afternoon to separately pass ordinances that may help protect against gas drilling issues.

The partnership is an intermunicipal group composed of Dallas, Franklin, Jackson, Kingston and Lehman townships and Dallas borough.

He also furnished sample dust, noise and light pollution ordinances and a sample road bond agreement. In addition, he provided a copy of Dallas’ zoning ordinance, which restricts drilling to certain areas of the borough and deals with screening and buffering and outdoor lighting issues.

END_OF_DOCUMENT_TOKEN_TO_BE_REPLACED 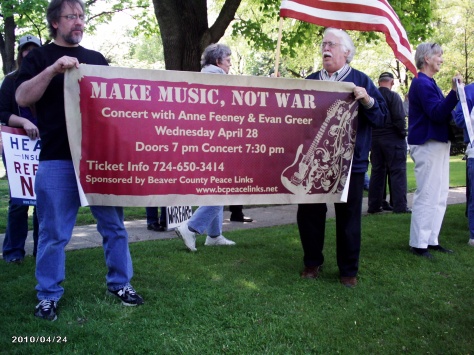 New York state environmental officials announced Friday that they would impose far stricter regulations for a new type of natural gas drilling in the state’s only two unfiltered water supplies, making it highly unlikely that any drilling will be done in the Catskills watershed that supplies drinking water to New York City.

The decision also applies to the smaller Skaneateles Lake watershed, which supplies drinking water to Syracuse and some other towns.

END_OF_DOCUMENT_TOKEN_TO_BE_REPLACED

Will the Real Tea Party Movement Please Stand Up?

Have you wondered how the Tea Party, portrayed as a “grassroots” movement, could possibly raise enough money in one year to procure a professionally-painted, luxury motor coach and send it on two highly-publicized national tours? Or how the Tea Party so quickly developed the expertise to plan, organize and execute the tours, and consistently draw major media attention to them?

The answer is that the Tea Party Express is not a “grassroots” effort. The Web site Politico.com obtained and posted a proposal (pdf) showing that long-time Republican party operatives are, in fact, directing the “Tea Party Express” portion of the movement. The “group” and its activities are the result of efforts by a Republican-affiliated political consulting and public relations firm, Russo Marsh & Rogers, based in Sacramento, California. PR executive Sal Russo of Russo, Marsh & Rogers is also the chief strategist for the Our Country Deserves Better, political action committee (PAC) formed in 2008 to oppose then-candidate Barack Obama.

END_OF_DOCUMENT_TOKEN_TO_BE_REPLACED

Cuban aid to Haiti is 250 times greater than US per GDP but ignored by US media.

At the recent UN Donor Conference on Haiti, Cuba announced a programme to rebuild that country’s entire national health service. Although this was, arguably, the most ambitious and impressive ’pledge’ of the 59 governments, regional blocs and financial institutions that made commitments, it was largely ignored by the leading US media-and hence overlooked by most of the world.

The Cuban programme, which is based on the highly effective system developed in that country, embraces primary, secondary and tertiary health care, and medical training. Some of the highlights of the Cuban plan are: