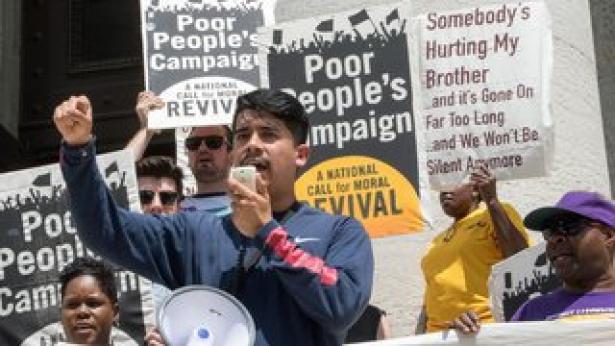 END_OF_DOCUMENT_TOKEN_TO_BE_REPLACED

Kids today are getting the short end of the stick

By Ian Thomas
Pittsburgh Post -Gazette
On television, the typical millennial narrative finds protagonists struggling to succeed creatively on their own terms as they navigate a hip photogenic urban landscape.

Whether it’s Lena Dunham’s character on “Girls” networking her way to an e-book gig, or Donald Glover’s character on “Atlanta” hustling to get paid as a hip-hop promoter, success may be incremental and slow in coming, but forward momentum ultimately rules the day. The reality of the millennial experience is far less promising, and the stakes are higher.

In “Millennials and the Moments That Made Us: A Cultural History of the U.S. From 1982-Present,” author Shaun Scott argues that the millennial experience is best explained in the context of neoliberalism, the economic policy of deregulation and entitlement diminishment that came to prominence in the form of Reaganomics and has continued, in various iterations, ever since.

Criticism of neoliberal policies is often derided as insufficiently respectful of the notion that publicly beneficial institutions, such as schools and hospitals, are better when they are run by the market principals that guide for-profit businesses. What that derision often fails to address is how previous generations prospered under the guiding principle it replaced.

From 1945 to 1973, a “Keynesian consensus” of organized labor, government and big business “created a state largely committed to social welfare,” Mr. Scott writes. The long-term and lasting effects of prevalent deregulation, he argues, is more akin to a rigging of the game in favor of big business. It yields an economic landscape on which CEOs get windfall bonuses while teachers have to pay for their own classroom materials.

Having lived in the shadow of this economic structure the longest, millennials are disproportionately affected by it.

Still, accusations of entitlement, privilege and laziness are lobbed at millennials, to the point that this flavor of criticism has become a staple of mainstream cultural discourse.

Enter the phrase “Millennials are killing” into any search engine and auto-fill will give you a litany of the services, institutions and products that millennials’ habits and circumstances are somehow ruining for everybody else. These accusations are as inaccurate as they are unfair, Mr. Scott argues.

“It is Baby Boomers, and not Millennials, who are far and away the most entitled generation in American history,” he writes. They benefit “by virtue of being born during a federal policy of full employment” and “have come to expect Social Security payments that are many times greater than if they invested the Social Security taxes withheld from their paychecks in U.S. Treasury bonds or high-performing index funds.”

Put simply, baby boomers enjoy more benefits than they earned. Moreover, millennials are financing these entitlements with benefits taken from their own paychecks.

Mr. Scott takes no issue with these entitlements. Rather, he points out that given the constant questioning of the future efficacy of Social Security entitlements, millennials are paying for benefits that they may not get to enjoy themselves.

“Millennials and the Moments That Made Us” tackles the social policies and world events that have shaped the living conditions of millennials and the cultural touchstones that have reflected those conditions from a variety of angles. Mr. Scott, a writer based in Seattle whose work has appeared in outlets as wide-ranging as Sports Illustrated and the socialist quarterly magazine Jacobin, offers a clear-eyed refutation of the stereotypes foisted upon millennials.

He is unapologetic about his biases, which, in the context of his survey, bolster his arguments. He is living the experience.

“My frame-of-reference as an author is that of a Black Millennial and a democratic socialist,” he writes. Mr. Scott writes with compassion for a generation that is widely dismissed as unserious, even as it is tasked with meeting the unrealistic expectations placed upon it by previous generations and trying to fix its own future with a box full of broken tools.

Mr. Scott casts a wide net but writes insightfully about everything from the “weapons-grade male entitlement” of Robin Thicke’s “Blurred Lines” to the gentrifying effect of fast-growing tech companies.

He finds Ryan Coogler’s “Creed” particularly illustrative and prophetic. “It reflects widely on an economy where one of the fastest growing professions among Millennials is in-home caregiving: a job that is as physically demanding as it is emotionally taxing,” he writes.

By fusing the demographic research of Neil Howe and William Strauss, who are credited with coining the term “Millennial,” with humane cultural criticism in the vein of the late Mark Fisher, Mr. Scott avoids writing a book-length list of grievances and, instead, offers a text that is comprehensive, accessible and enlightening, although he ultimately undersells the pervasiveness of these cultural conditions, which effect every generation, across classes, by limiting his scope to their effects on millennials.

Mr. Scott offers potential remediation in his “Millennial Agenda,” a 10-point plan that includes ideas like changing the minimum age to run for president from 35 to 25, federal election reform and federal wage reform. For politicians to engage millennials as a political force, they must understand and engage with their needs on a more material level.

They would be wise to do so. Any change, Mr. Scott argues, will require an increase in civic engagement. “Because when we fight, we win,” he writes.