Western PA as a Case in Point 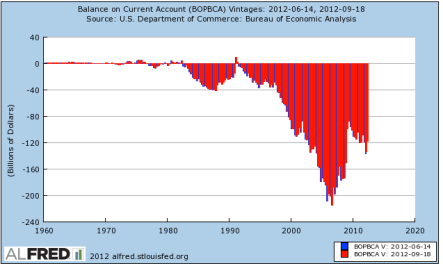 The US continues the program of selling commodity raw materials while importing manufactured goods.  This futile trade deal is also not working because always, the value-added labor that goes into production is lost when a country trades this way.  If a country has a small population and lots of raw materials, it can get rich doing this but not a country with 350 million people.  Even Saudi Arabia, due to making birth control illegal, has a rapidly growing population that is eating into oil export values and soon will erase it entirely.  Japan, with half the population of the US, is seeing its trade decline, too.  While importing energy due to Fukushima.

The trade deficit was hardly mentioned during the last election.  It is as if it doesn’t exist.  Even though it is the core problem within our economy, one that has been papered over, literally, by the US printing trillions of extra dollars.  Inflation has been kept down due entirely to trade partners holding excess US dollars in FOREX accounts overseas.  But the US is desperate to generate some funds to cover the river of red ink flowing through our economy so of course, we do this by exporting lumber, gasoline, gas and oil as well as other primitive commodity products.

Naturally, this doesn’t plug the giant hole in our economy! Nonetheless, DC pundits and politicians tell us gravely, we must do this more and more and eventually it will fix things. Here is the latest delusional story from DC misleading people about the trade deficit: Natural gas exports: A boon to the economy – The Washington Post

END_OF_DOCUMENT_TOKEN_TO_BE_REPLACED

Emotionally, I love Iceland’s financial policies since the crash of 2008: 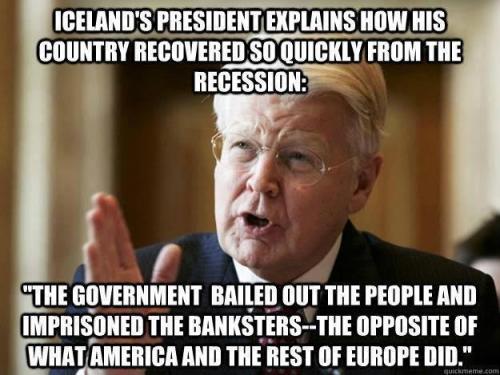 Iceland went after the people who caused the crisis — the bankers who created and sold the junk products — and tried to shield the general population.

But what Iceland did is not just emotionally satisfying. Iceland is recovering, while the rest of the Western world — which bailed out the bankers and left the general population to pay for the bankers’ excess — is not.

This was no post-Lehman Brothers recession: It was a depression.

Since then, Iceland has turned in a pretty impressive performance. It has repaid International Monetary Fund rescue loans ahead of schedule. Growth this year will be about 2.5 percent, better than most developed economies. Unemployment has fallen by half. In February, Fitch Ratings restored the country’s investment-grade status, approvingly citing its “unorthodox crisis policy response.”

So what exactly did Iceland do?

First, they create an aid package for homeowners:

To homeowners with negative equity, the country offered write-offs that would wipe out debt above 110 percent of the property value. The government also provided means-tested subsidies to reduce mortgage-interest expenses: Those with lower earnings, less home equity and children were granted the most generous support.

In June 2010, the nation’s Supreme Court gave debtors another break: Bank loans that were indexed to foreign currencies were declared illegal. Because the Icelandic krona plunged 80 percent during the crisis, the cost of repaying foreign debt more than doubled. The ruling let consumers repay the banks as if the loans were in krona.

These policies helped consumers erase debt equal to 13 percent of Iceland’s $14 billion economy. Now, consumers have money to spend on other things. It is no accident that the IMF, which granted Iceland loans without imposing its usual austerity strictures, says the recovery is driven by domestic demand.