Western PA as a Case in Point

The US continues the program of selling commodity raw materials while importing manufactured goods.  This futile trade deal is also not working because always, the value-added labor that goes into production is lost when a country trades this way.  If a country has a small population and lots of raw materials, it can get rich doing this but not a country with 350 million people.  Even Saudi Arabia, due to making birth control illegal, has a rapidly growing population that is eating into oil export values and soon will erase it entirely.  Japan, with half the population of the US, is seeing its trade decline, too.  While importing energy due to Fukushima.

The trade deficit was hardly mentioned during the last election.  It is as if it doesn’t exist.  Even though it is the core problem within our economy, one that has been papered over, literally, by the US printing trillions of extra dollars.  Inflation has been kept down due entirely to trade partners holding excess US dollars in FOREX accounts overseas.  But the US is desperate to generate some funds to cover the river of red ink flowing through our economy so of course, we do this by exporting lumber, gasoline, gas and oil as well as other primitive commodity products.

Naturally, this doesn’t plug the giant hole in our economy! Nonetheless, DC pundits and politicians tell us gravely, we must do this more and more and eventually it will fix things. Here is the latest delusional story from DC misleading people about the trade deficit: Natural gas exports: A boon to the economy – The Washington Post

USUALLY, OPPONENTS of freer trade argue that Americans shouldn’t be buying so many cheap products from abroad, sending their cash overseas. But when it comes to exporting some of this nation’s abundant supplies of natural gas, those who oppose opening up to the world turn that logic on its head — arguing, strangely, that Americans shouldn’t be trying to sell this particular product to other nations, bringing money into the country in the process. Both arguments are unconvincing, and for the same reason: When countries can buy and sell to each other, their economies do what they are best at, producing more with less and driving economic growth. 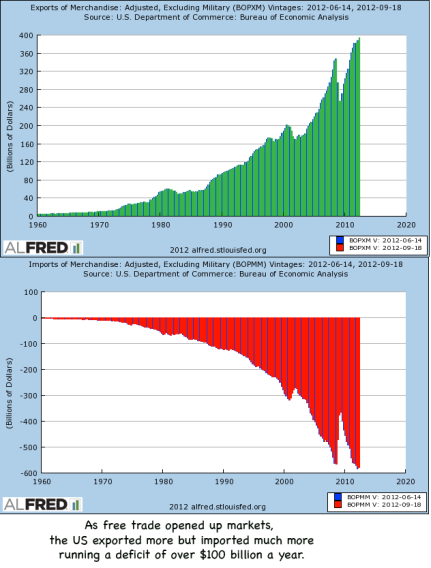 US exports rose while deficits deepened

The scale of the problem isn’t obvious if we ignore the numbers of the graphs above.  The US export graph is only $400 billion in scale whereas the import scale is -$600 billion in scale.  It is much, much bigger than the export scale.  The Washington Post editorial writers are stupid people.  They make typical straw man arguments and of course, never, ever let any anti-free trade writers like myself, appear in print to refute their arguments.

It is silly to try to stop the flood of manufactured goods via exporting oil and gas! It will not work.  The only way it can work is if the US workers are too poor to buy even cheaply manufactured goods from Asia.  And I would suggest, the free trade plan cooked up by the richest 1% is exactly that: designed to cut off the bulk of US citizens from buying much of anything, including energy!

As the US exits the present depression, I note that trade has picked up and of course, the deficit has not returned to previous levels under Bush but the trend is for it to go back to that level.  It grows greater and greater the more the US employment situation gets better.  This dynamic is destroying the working class as we see in this fairly good WP story about a typical poor family that was once middle class:

In New Castle, Pa., trying to break free of poverty – The Washington Post

Tabi heard stories about the olden days. She came from welders and ceramic production workers. But, to Tabi, the sprawling Shenango China factory where her grandfather and great-grandfather worked was just a boarded-up place on the way to Wal-Mart.

Her New Castle was the one that existed now: white, working class, with poverty that had deepened into the second and third generations. Nearly three-fourths of the students in Tabi’s school qualified for free or reduced-price lunches, and one-third of New Castle families with children younger than 18 had incomes beneath the poverty level.

The bleak post-industrial landscape has many gas and oil rigs.  These things, which have very little labor involved once they are set up, churn out endless profits for the administrators and owners of the natural resources which are sold to the highest bidders who are, of course, Wall Street billionaires.  The labor-value-added aspect of oil and gas extraction is, after it starts, nearly nil.  So, exporting this product brings HUGE profits and benefits to the Wall Street billionaires but brings virtually no income to workers.

We see this clearly in Texas, Alaska and Oklahoma as well as the other oil-pumping states.  The gold rush period where prospecting and building facilities including ports and pipelines is teeming with workers who get some good pay, even.  And then it all ends and the system silently works along with the citizens left behind in greater and greater poverty.  Back to the editorial suggesting oil and gas exports will save our economy:

Critics point out that exporting natural gas might increase domestic prices for the fuel somewhat, which could raise the cost of electricity and other goods. Yet the report noted that higher natural gas prices would also mean more foreign money coming into the country… It would be particularly perverse for the Obama administration, which has made an explicit commitment to increasing the nation’s exports, to preserve restrictions on natural gas exports. The government should permit energy companies to sell as much of the fuel as the economics warrant, whether in Germany or Germantown.

And…exporting oil and gas and gasoline HAS caused prices to shoot upwards and not a tiny bit by massively.  The oil exporters here act like Saudis, that is, they are out to exploit us as much as possible.  So, instead of a protected industrial base running on oil and gas that is prevented from exiting the markets, we have our natural resources traveling overseas to manufacturers who are competing with us! When oil was found in Alaska, we were told, this would stop the US from importing oil.  Instead, it was mostly sold to Asia which boomed while the US languished.

Back to the story about Tabi in Pennsylvania:

All around them in the rural dark, energy companies were buying up land for natural gas exploration. Deric heard in class that Shell Oil was building a $3 billion refinery site in Beaver County…Monthly income for Tabi and her mother at the house on Shenango Street was an $824 check from Social Security, food stamps and survivor’s benefits for Tabi from the death of her father, a welder who died of an overdose.

Note the ‘BUYING up land’ part.  Poor farmers are selling their homes to Wall Street billionaires who then exploit the land to extract energy products and then will dump the land as worthless when the gas peters out.  The complex society of farms, forests, towns and services are collapsing rapidly and being replaced with literal ghost towns.  The loss of manufacturing is hurting not just the big cities but all of small town America.  Giant corporate farms are wiping out the family farms.

And Obama has to service the very rich, as any President must these days since they have the money and power: President Obama’s Inaugural Committee Will Accept Corporate Money This Year. $53 million is expected to be spent on parties in DC.  Ouch.  Why? The rich will get front and center seats, too.  Isn’t that nice? The idea we need massive parties to celebrate victories has reached Roman dimensions.  Our need for pomp and ceremony is out of control even as the plebeians turn increasingly into either slaves or worthless mobs to be shoved hither and yon.

And our government is at war with the lower working class, that is, the odious and insane War on Drugs.  This worthless war has no literal end.  Anyone can use drugs and anyone who wants, does this.  The middle and upper classes do these drugs and instead of prison, get to go to fancy clinics to recover whereas the lower classes go to prison.  So of course, due to being run by rich people, the Obama administration considering ways to overturn marijuana legalization in Washington and Colorado.

I am totally against laws concerning drug abuse.  They just simply do not work.  Period.  These laws are ridiculously expensive and make our own police into hostile occupying forces which are hated by the lower classes and sneered at by the middle and upper classes.  When ‘speed’ was outlawed back when it was a legal drug, alternatives were created which give the same effect but are ten times nastier to one’s health.  So now, people are addicted to drugs that act like speed but kill much faster and has much worse side effects.

The more drugs are cracked down on, the more evil the substitutes and the entire point of this pointless war on drugs is to protect people’s health.  This is obviously doing the exact opposite.  So we must stop it for this reason.  The drug dealing, the drug wars, the killings, the health tragedies are all piling up like crazy and the fake war goes onwards relentlessly.  I think that the government should hand out drugs.  This way, the profit motive is gone, the workers can be stoned and money will be saved.

Except this will kill the underground market which is keeping the lowest classes awash in cash.  And then they will be motivated to fight for their right to have honest work, no? So the US culture rolls relentlessly onwards with the bulk of the lowest classes stuck as drug runners and dealers or on welfare while the upper classes milk our resources for export markets and then stow the money away in offshore banks.  With their main overhead costs being bribing politicians.