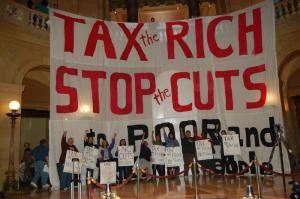 In advance of President Obama’s speech Wednesday on the budget deficit, the nation’s largest union and professional association of nurses today called on the President to oppose any cuts in Medicare, Medicaid, and Social Security – and strengthen the nation’s economy by restoring fair taxes on corporations and the super-rich, ending the wars, and creating good paying jobs.

“America is not broke, it’s just deficient in political courage and leadership,” said Jean Ross, RN, co-president of the 160,000-member National Nurses United. “It’s time to tell Wall Street and the politicians they finance in Washington and state governments that the American people have sacrificed enough. There can be no more cuts in healthcare programs for seniors, the disabled, and the disadvantaged, and no reductions in retirement security.”

NNU’s national executive board recently passed a resolution stating that it will not endorse any federal candidate in 2012, from the President to Congress, who votes to cut Social Security.

“We expect the President and our elected leaders in Congress to stand up, and protect our most basic safety net programs, which start with Social Security, Medicare, and Medicaid,” said Ross. “For 30 years, we’ve seen a massive shift of our nation’s wealth and resources transferred from Main Street to the executive suites. The result, record profits, and unbridled corporate corruption and thievery, while wages for working people stagnate, and income and health insecurity soar.”

If the President and the Democrats want to cut the deficit, said Ross, they should end the wars in Afghanistan, Iraq, and Libya, reduce military spending, close all the corporate tax schemes that have allowed more than 40 percent of corporations to avoid taxes, restore a fair tax system, and re-invest in America to create good paying jobs in the U.S., not China or India.

NNU is also calling for a Main Street Contract for the American People, a second bill of rights, that includes jobs at living wages, guaranteed healthcare for all, a secure retirement, a safe and healthy environment, a secure retirement for everyone, and respect for union rights.

Republican proposals to privatize Medicare, slash Medicaid, and make further deep cuts in safety net programs are “obviously reprehensible,” said Ross. “But without real leadership from the other party and the White House, and a clear road map for an alternative vision, these mean spirited proposals, and continued handouts for the wealthy and corporate elites, will surely follow. It’s time for the President to stand up for the working people of this country, not the corporations which brought us an economic tsunami.”