Even though thunderstorms and downpours had swept through Beaver County all afternoon, close to 200 concerned citizens showed up for a candlelight vigil in front of the Beaver County Courthouse on Monday evening.

"Are you fired up?" shouted Roni Hamiel of SEIU Local 668 headquarters in Harrisburg, "Are you sick of this mess? The rich are getting richer and we’re struggling every day, barely getting by. We want fairness, we want our bargaining rights, and we want a decent future."

Local members of SEIU 668 spearheaded the vigil, with others joining in to organize a broadly supported event. Throughout PA, events scheduled around the anniversary of Dr. King’s assassination were organized by CLEAR (Coalition for Labor Engagement and Accountable Revenues). CLEAR is a coalition of public and private sector unions involved in protecting labor rights and public services from impending budget cuts.

"We are standing beside you in solidarity," said Willie Sallis, president of the Beaver County NAACP, from the podium. "Not behind you, but beside you. We are partners in this struggle."

END_OF_DOCUMENT_TOKEN_TO_BE_REPLACED 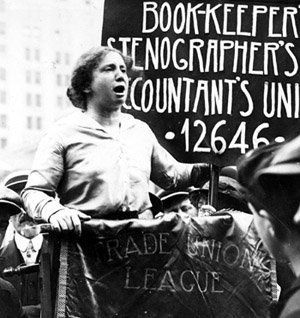 Today in Labor History: Birth of Rose Schneiderman, prominent member of the New York Women’s Trade Union League, an active participant in the Uprising of the 20,000, the massive strike of shirtwaist workers in New York City led by the International Ladies’ Garment Workers’ Union in 1909, and famous for an angry speech about the 1911 Triangle Shirtwaist Factory fire: “Every week I must learn of the untimely death of one of my sister workers…Too much blood has been spilled. I know from my experience it is up to the working people to save themselves. The only way they can save themselves is by a strong working-class movement” (1882)

For an Upsurge in Class War

Working-class solidarity actions involving thousands of workers were among the lead news items in the headlines in nearly 1200 cities and town around the country over the April 4 weekend. The Western Pennsylvania, West Virginia and Eastern Ohio ‘rust belt’ region was no exception.

The occasion commemorated the anniversary of the April 4, 1968 assassination of Dr. Martin Luther King, Jr. during his effort to help striking sanitation workers in Memphis, Tennessee win union recognition. The entire U.S. labor movement seized the time to organize public protest against the outrageous rightwing attacks on worker rights in Wisconsin, Indiana and Ohio. The AFL-CIO knows full well that more attacks are coming, and its ‘We Are One’ campaign for the day was a grassroots dress rehearsal and consciousness-raising effort to prepare both its troops and its community-based allies for more battles to come.

“We are one! We are one!’ and ‘What’s Disgusting? Union busting!’ were among the chants echoing off the concrete and glass walls of downtown Pittsburgh. Somewhere between 500 and 1000 marchers waved V-signs at passersby in cars and buses–but more often than in a long time, one saw a sea of the more militant clenched fist salutes as well. As usual, different contingents of workers wore their color coded T-Shirts for the day-camouflage for the UMWA, dark blue for the Steelworkers, red for Unite Here! hotel workers, and purple for SEIU service workers.

USW President Leo Gerard fired people up at the first stop, the Equitable Gas headquarters. “These rich bastards aren’t paying any taxes and sending the bills to us and giving themselves record-breaking bonuses. If tax cuts created jobs, Bush would have left office with full employment. The speculators gamble with our money and want us to cover their losses. Well, when they come around again, they can kiss my ass.”

The crowd loved it. “What do you think, why are you here?” I asked Pamela Maclin, a woman worker standing near Leo, “We fought and died for our union rights, our civil rights.  We’re taking a stand; they’re not going to take them away.”