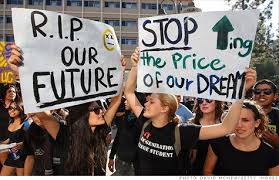 May 13, 2013 – The student loan burden is reaching crisis proportions. Young Americans are being saddled with unsustainable debts. A New York Federal Reserve Bank study found that a stunning 43 percent of 25-year-olds had student loan debts in 2012. Debt now averages over $25,000 for graduates of four-year colleges.

Student loan debt now is about $1 trillion. The only kind of household debt that continued to rise through the recession, student loans now exceed credit card debt and rank second only to mortgages. The percentage of borrowers who are more than 90 days delinquent has risen to 17 percent, up from 10 percent in 2004.

These are the young people who’ve done everything we told them to do. They worked hard, stayed out of trouble, got admitted to college and sacrificed to succeed. Then they graduated, burdened with staggering debt, into the worst economic crisis since the Great Depression. Many can’t find jobs; those who do often end up with low-wage and part-time work and debts they can’t repay.

Student debt is itself a huge obstacle to the recovery. Unless their parents have money, young Americans who achieve the most can’t begin to save for a down payment on a home, start a business or save for retirement.

This crisis stems from the successful conservative efforts to starve government. Cash-strapped state governments cut the contributions made to public colleges and universities. The cost of college was slowly privatized, with more and more left to the student. Those with affluent parents had no problem; those with working parents had to take on debt.

Now the crisis is coming to a head. The sequester and other budget cuts are forcing further cutbacks.

END_OF_DOCUMENT_TOKEN_TO_BE_REPLACED

For immediate release: Contact, Bernie Lunzer, TNG-CWA President,
202-258-3231, bernielunzer@gmail.com
The Newspaper Guild-CWA and its local that represents AP journalists, The News Media Guild, demands that the U.S. Justice Department return all telephone records that it obtained from phones — including some home and cell phones – of Associated Press reporters and editors.
The collection of these records is egregious and a direct attack on journalists, and the Justice Department needs to cease and desist such investigations. The ability of journalists to develop and protect sources is vital to keeping the public informed about issues affecting their lives.
There could be no justification or explanation for this broad, over-reaching investigation. It appears officials are twisting legislation designed to protect public safety as a means to muzzle those concerned with the public’s right to know.
The suggestion that the news story ‘scooped’ an announcement for partisan political purposes only exacerbates the damage such actions can have on a free press. This investigation has a chilling effect on press freedom in the United States – a right enshrined in the Constitution. Please contact your representatives and the White House to tell them to stop this outrageous, abusive investigation now.