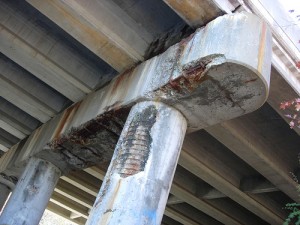 Cong. Jason Altmire loves to get his picture in the paper standing around our locks and dams. It promotes the illusion that he is doing something on the House Transportation committee of which he is a member.

Pittsburgh is the second largest inland port in the United States. But the locks system that feeds this transportation artery is so old that Pittsburgh is losing out to other sites that need efficient transportation. Our lock system is smaller than the rest of the locks onthe Ohio River so they won’t take big tows. The large tows must be broken and moved through the locks in sections. Large windmill blades can’t fit in the locks.

But it isn’t only the decrepit lock system. Our bridges are in serious danger of failing. No doubt Altmire will rush to the next bridge disaster for a photo op and issue a press release about some million dollar bill he’s introduced. But we need a Congressperson who will fight for $billions of infrastructure spending today in Western PA.

High speed rail and bus transportation lowers auto traffic congestion on our highways, reduces our oil imports, and fights global warming. But Jason Altmire has done nothing to push the Maglev rail project that is ready to go. It just needs funding. Altmire is doing nothing on the House Transportation committee to help our urban bus systems. PAT will have to cut 35% of it service due to underfunding when it should be expanding service to get cars off the road.

Jason Altmire is only interested in fighting for bank profits. After bailing themselves out and running up a record deficit, the banks are now crying deficit. Cut the deficit. So Altmire is singing the same tune – cut the deficit, reduce spending. We can’t afford to spend money on rail, buses, bridges, and locks says Altmire.

To add insult to injury Altmire also wants to take our social security savings away from us to help the banks keep their interest rates low. He has stated that he will not oppose the deficit commission’s recommendations to cut social security.

Join PDA at Altmire’s office on August 18th at noon to say hands off social security. Money for jobs not for war. Save our bridges and locks. Build Maglev NOW!

As a senior vice president of HDR Engineering Inc., based Downtown, Mr. Gilbert was among those responding to three near-disasters on Pennsylvania bridges in recent years.

Those incidents — the collapse of a bridge over Interstate 70 in South Strabane, partial collapse of the Birmingham Bridge in Pittsburgh and a massive crack in a pier on Interstate 95 in Philadelphia — helped fuel a surge in bridge spending in the state.

But with 5,600 bridges still rated structurally deficient and hundreds of others aging toward joining that list, the state’s bridge improvement campaign is in danger of running out of steam.

“We’re on afterburners right now with our bridge team,” Mr. Gilbert said on Friday. “The problem is, the state and federal governments are on their reserve tanks.”

His comments came after Gov. Ed Rendell, in a Pittsburgh stop on his statewide bus tour, cited the dangers of decaying bridges in urging the Legislature to act quickly to solve a transportation funding crisis brought on by the federal government’s rejection of tolls on Interstate 80.

The rejection caused a $472 million annual loss in funding for highway and bridge programs and public transit under Act 44, the 2007 state law that was supposed to end decades of underfunding of transportation.

A state advisory commission estimated that Pennsylvania is $3.5 billion per year short of spending enough to bring its transportation network to a state of good repair.

Amid concerns about declining federal and state funding, including the end of the economic stimulus program, the Southwestern Pennsylvania Commission has slashed projected highway and bridge spending by 32 percent in its four-year Transportation Improvement Program that starts in October.

In February 2008, a span of the Birmingham Bridge fell nine inches off of its rocker bearings and landed on a concrete pier, dislodging it.

A motorist crossing the bridge noticed a median barrier that seemed to have grown several inches taller and notified authorities.

Had the girder not landed on a pier, it could have caused a domino effect, bringing down a large section of the bridge approach and sending cars streaming off the end of the bridge into the river below, Mr. Gilbert said.

“People were driving over that bridge by the thousands” around that time because of major events in Oakland and at Mellon Arena, he recalled. “It could’ve been much worse than the Minnesota event.”

That collapse, also mentioned by Mr. Rendell on Friday, was on the Interstate 35W bridge in Minneapolis in August 2007. It killed 13 and injured 145.

The month after the Birmingham Bridge collapse, a passer-by in Philadelphia noticed a huge crack in a pier holding up an elevated section of I-95, one of the nation’s busiest highways. It was shut down for three days of emergency repairs.

Had the crack gone unnoticed, “we might have had an incident that would’ve made Minnesota seem like a minor accident,” the governor said.

On his tour, Mr. Rendell saw a bridge in Homer City whose two center lanes were closed to limit the weight of traffic on the span.

And in Manor, Westmoreland County, a bridge had two of its three lanes closed, with traffic alternating on the open lane, he said.

“The outer lanes (had) gaping holes in them,” he said.

The first wake-up call, Mr. Gilbert said, was in 2005 when a bridge over I-70 in South Strabane collapsed onto the highway, injuring five. The incident prompted emergency inspections of every similar bridge in the state.

The Pittsburgh Post-Gazette reported last week that 76 bridges with serious deficiencies in the five-county Pittsburgh region have no rehabilitation or replacement projects planned over the next four years because there’s no money for them.

Statewide, PennDOT has reported that repairs of 449 bridges will be delayed by the funding shortage.

Even in Minnesota, where the wake-up call was loudest, the urgency to fix bridges seems to have waned. Newsweek reported last week that the number of structurally deficient bridges there actually has risen since 2007.

“It’s going to take another crisis,” said Michael Crall, who recently stepped down as head of the Army Corps of Engineers’ Pittsburgh district to take a management post at HDR Engineering. “We have soon forgotten.”