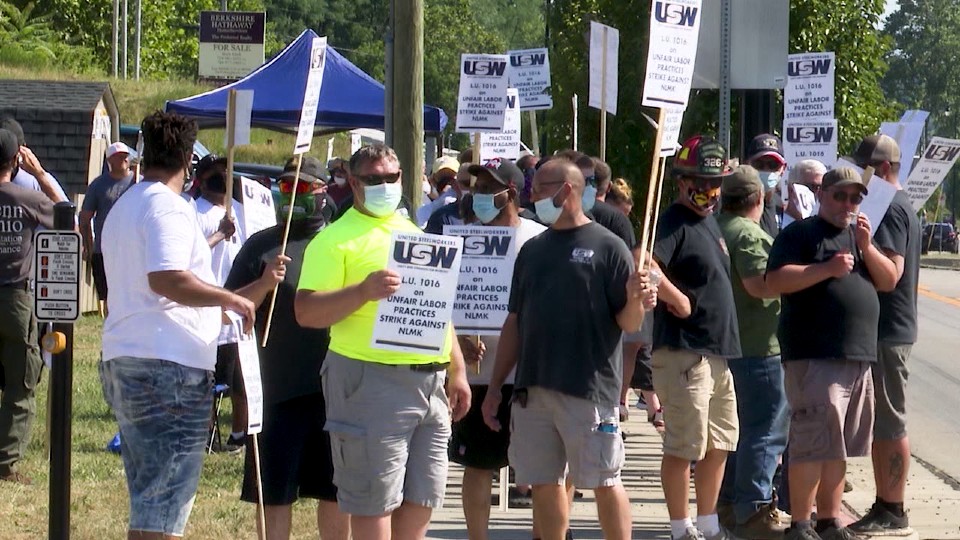 Just up the road from me in W PA, workers at a local steel fabrication plant employing almost 500 have gone on strike. The main issue is their healthcare coverage.

But this also happened there. Imagine this.  Your husband dies in a horrible motorcycle accident. You go to his workplace a week later, to fill out the paperwork for his life insurance and other paperwork requirements. The HR person informs you  that the company canceled your family’s health insurance the very day he died with no notification to you, the bereaved spouse. You and your family have been without healthcare coverage this whole time.

The company did this even though Jackie Vezilli’s husband’s paycheck had been deducted for his share of the healthcare coverage. In Jackie  Verzilli’s own words, “This video is happening because of the lack of respect and disregard for my husband, myself, and my family by this company is indeed all true. This video is happening because my husband worked for this company for 13 years, all the way back when it was called Gibraltar. He worked countless hours of overtime. He was in a  really bad work accident for this company and survived.”

Jackie is struggling with the company about this.

This steel mill, now owned by  NLMK, has been in Farrell, PA for a long time. It is a generational workplace for many families in the area. People who work there have social ties from high school and even elementary school. It is an anchor for the community. People in this part of W PA have built good lives around good union jobs there.

Farrell is home to perhaps the last New Deal Club in the country.

In the days before the steel mills were booming, the first-generation immigrants and their children weathered the Great Depression. Because of that, when they were opening a social club for Democrats, to transcend all the ethnic clubs already in existence, they named it for FDR. In the words of Ed  Nicastro, as recorded in an oral history taken by J. Kasich, “he saved the nation from starving. Ever since that time in 1933 this club has still honored his birthday and went by the rules he made a lot of them.  What he did for the workingman and everything and that’s why there is still a Democratic club left in the country”.

Throughout the prosperous years of busy steel mills hiring workers, and the years of flourishing local economies that resulted, Farrell honored FDR.  At one time, this was a place where one income could support a family. Things have been getting increasingly harder though.

Healthcare is an ever-increasing need for the people around me, a need ever more neglected by the forces controlling the economic system we live in. As people lose their jobs due to a worldwide pandemic, they also lose their healthcare coverage, making a bad situation worse.

I live in a part of the country that already has severe disparities. Pittsburgh is known as a healthcare hub. This is confusing. UPMC, the dominant hospital system in Pittsburgh, has been a pioneer in organ transplants. At the same time, a battle between the UPMC insurance plan and the competing Highmark insurance plan has forced patients to switch doctors and plans. This battle compromised the healthcare of my community. It makes everyone more insecure about their healthcare coverage.

And that all takes place in Pittsburgh, which is more prosperous than my community and most of the communities around me.

Farrell is in neighboring Mercer County in the de-industrialized Rust Belt outside of Pittsburgh. In Farrell, the owners of this steel fabrication plant are paying $150 million for tariffs they claim were unskillfully placed in an off-hand manner. Some 25% tariffs on foreign steel were abruptly instituted by the Trump administration in 2018.

With no national industrial plan to replace the produced steel this plant needs to service its customers, the survival of this small town in Western PA is being threatened by the current Republican administration.

That is the context of the striking workers’ lives in a small town about an hour outside of Pittsburgh, at the  NLMK steel plant in Farrell.

A unionized worker from that plant recently attended our local  Progressive Democrats meeting to tell us about it. In their previous contract, they had a choice of a PPO, that allows patients to freely see doctors within the plan, or a high deductible plan.  The company wanted to eliminate the PPO.The unionized workers prefer having a choice. I think our experience with high deductible plans leaves us all fearing that the deductibles are always going  to become entirely unaffordable. The existing high deductible plans are already unsustainable. The choice left to us is using healthcare or putting food on the table. These high healthcare costs force workers to rely on high levels of overtime, further deteriorating working people’s family life and time for involvement in their communities.

We need to be secure enough to care for each other.  We need to care for our families. We need to participate in community life. Access to healthcare is a piece of that puzzle. While workers are forced to submit to employers out of fear of losing healthcare,  we see all kinds of ripple effects through our community.

It hurts us in many ways. Wages are lower because unionized workers are forced to fight for their healthcare coverage instead of wages. Low wages mean less buying power in our communities, higher student debt because families can’t afford to help, less opportunities for younger children because their parents are always working, just to name a few.

A healthcare system that covered everyone regardless of employment would be a big step forward in solving these problems. The only way we can afford this will be to eliminate the insurance companies that siphon off profit while adding no value to our healthcare. HR 1384, the Improved and Expanded Medicare for All  Bill, would do this. As support for this idea grows throughout the country, as more and more people lose their healthcare coverage during a pandemic, it’s time to enact this Bill.

We’re going to have to make our elected leaders do this with the coming Democratic administration.  An increasing number of elected progressives in Congress will help. If a shift of control happens in the Senate, this could be the historic period to achieve Medicare for All. We should see this as a real possibility. This is the reason we’re in the political struggle: to win what we need. This is a reason to vote Democrat in 2020.