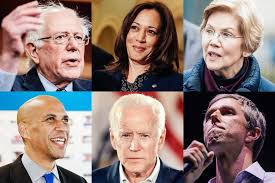 July 17, 2019 – The 2020 presidential candidacy race is in full (absurdly early) swing, and there is a clear and obvious internal battle currently raging for the soul of the Democratic Party. One faction is attempting to pull the party in a more populist, social-democratic direction, while another favors maintaining a neoliberal, pro-business course.

We all know the most prominent members of the first group: The likes of presidential hopeful Bernie Sanders and freshmen representatives like Alexandria Ocasio-Cortez, Ilhan Omar, Rashida Tlaib and Ayanna Pressley are constantly referred to (accurately) as representing the left of the party (e.g., New York Post, 7/9/19; New York Times, 4/10/19; New Yorker, 6/18/19), but also as a cabal of “extremist” (Atlantic, 4/3/19; The Hill, 6/17/19), “far-left” revolutionaries (CNN, 7/7/19; CNBC, 7/5/19) who have “contempt” for Americans (Fox News, 7/11/19). Given the broad overlap of their political positions with those of the public at large (FAIR.org, 1/23/19), those labels, popular as they are in the media, are pretty dubious.

But if there is a left-wing of the party, there must, logically, be a right. And it is equally obvious to those paying attention who represents that right-wing: figures like Nancy Pelosi, Joe Biden and Amy Klobuchar come to mind.

The media do report on the split, but they never identify the latter as representing the right at all. In fact, the phrase “right-wing Democrat” has not appeared in the New York Times for over 30 years.

Last week, the Boston Herald (7/11/19) decried Ocasio-Cortez, Tlaib and Omar as far-left “bullies” who were undermining Pelosi, and “sowing division” at a time when the party “needs to project a unified—and more centrist—front to retain its majority and knock Donald Trump from office.” The piece did not, however, scrutinize Pelosi’s political positions—or even identify them at all.

This is a common occurrence in media, and has the effect of normalizing the right-wing of the party as the default. Constantly reminders that Sanders, Ocasio-Cortez and Co. are leftists prime the news consumer to be on the defensive. “You are about to hear socialist propaganda,” is the subtle message delivered. But an analogous message is not transmitted if others are not identified as on the right. Understanding the power of this technique, in 2015, nearly 90,000 Britons signed a petition asking the BBC, in the interests of even-handedness, to start describing Prime Minister David Cameron as “right-wing,” just as it constantly called Labour leader Jeremy Corbyn “left-wing.”

On the US struggle, Buzzfeed News (7/10/19) reports Pelosi has been “publicly feuding” with “left-wing members of the caucus and their staff,” while the Washington Post (7/2/19) sympathetically portrayed her has being under attack from an “open rebellion” of “hard-liners” in the party, with neither suggesting she herself holds any particular political ideology. The effect is to present the battle between left and right as one between radical revolutionaries and the “mainstream,” “normal” or “default” position.

All this despite the fact that Medicare For All and free college tuition are very popular in the US, with even a majority of Republican voters supporting the former. Meanwhile, Ocasio-Cortez’s tax hike proposal for the super-rich is more popular than Trump’s tax cuts, and a plurality of Americans support her supposedly radical leftist Green New Deal. When the public, not political parties, define the left/right spectrum, the landscape appears very different.

When any position is assigned to those who have controlled the party for many decades, it is often misleading. Maureen Dowd in the New York Times (7/6/19) describes Pelosi as “trying to keep the party center-left” with the goal of ousting Trump from office by appealing to the American people, only for that to be “jeopardized” by the party’s supposed “lurch” to the “far left.”

Despite this, Biden describes himself as “center-left,” as do media (e.g. Politico, 6/8/19; Real Clear Politics, 6/12/19; Wall Street Journal, 6/3/19). As the Washington Examiner (6/21/19) noted, the dilemma for the party was between picking a leftist like Sanders or steering a “center-left” course with Biden.As a senator from Delaware, he is a friend of large finance and tech corporations, and blocked student debt forgiveness. In this election cycle, he opposes Medicare for All and claimed that billionaires were being “demonized,” assuring them that if he were president, “nothing would change” about America. “I need you very badly,” he told a group of extremely wealthy donors. He also suggests moving the party to the right by working with the GOP.

Another Democrat not only on the right of the party, but on the right side of the political spectrum more generally, is Joe Biden, a current frontrunner for the presidential nomination. Biden began his political career by opposing busing and maintained a very close friendship with arch-segregationist Strom Thurmond until his death, performing the eulogy at his funeral. Among the most hawkish of Democrats, he strongly supported the Iraq War and even boasted he was the true author of George W. Bush’s PATRIOT Act. He opposed immigration and suggested using troops against undocumented workers.

Successfully positioning yourself in the center is a powerful rhetorical and psychological tactic. Many people like to think of themselves as in the middle. The center is often considered (wrongly) as the default position, and therefore free of bias, as opposed to those on the extremes, which hold negative connotations.

As explored previously (FAIR.org, 3/23/19), every political organization Washington supports is presented as a moderate, centrist force. Indonesian military dictator General Suharto, who presided over genocides against ethnic Chinese and Timorese, was described as a moderate (Christian Science Monitor, 2/6/87). The New York Times (3/7/33) even described the “new moderation in the political atmosphere” in Germany as Hitler came to power, while the Philadelphia Daily Bulletin (1/30/33) praised his “indications of moderation” (cited in the Daily Beast, 12/20/15).

Even Donald Trump Jr., someone not noted for his high intellect and political wisdom, is in on this trick. Writing in The Hill (7/11/19), he “warns” us that if the Democrats undermine “centrist” “moderates” like Pelosi, allowing “radical left” “extremists” like Ocasio-Cortez to come to power, his father will be assured of winning the next election. This has to be the apotheosis of the “Inexplicable Republican Best Friend” trope (FAIR.org, 2/26/19), in which media conservatives offer supposedly good-faith advice to Democrats on how to beat them (which always entails surrendering progressive principles and embracing conservative policies).

Corporate Democrats have now begun to use the “this is why Trump won/will win” tactic on the left. The Washington Examiner (7/10/19) warns the “left-wing elites” that their single-minded charge towards is socialism will isolate and alienate them from “moderate Democrats” and the vast political center of America. Instead, they must be “pragmatic” and choose the best candidate: Joe Biden.

“Pragmatic” meaning adapting sensibly and adopting realistic, fact-based positions—is another newspeak word media use to describe right-wing Democrats espousing pro-corporate policies, regardless of what the facts actually are. CNN (2/18/19), for example, applauds Klobuchar for being the “pragmatic” presidential candidate. Her pragmatism, according to the positive CNN portrait, was “resisting the urge to pander to the party’s progressive wing,” as shown by her strong opposition to Medicare for All, the Green New Deal and free college—all of which, we have seen, are distinctly popular with the public (Jacobin, 8/24/18; Atlantic, 6/21/19) and could be huge vote-winners.

That “pragmatic” is usually used as a euphemistic codeword for moving towards the right can be seen by glancing at recent headlines:

Even explicitly anti-left organizations are not described as right-wing. On a story covering the Democratic Majority for Israel, which it notes was set up by “major donors and Washington insiders” expressly to counter left criticisms of Israel in the party, the Huffington Post (7/11/19) did not describe it as “conservative” or any similar label, but framed the debate as being between the left and the “pro-Israel” wings of the party. If wealthy donors and “Washington insiders” don’t count as the right wing of the party, no one can.

Corporate media are funded by the same sources that fund both parties and broadly share the same ideology, hence the reluctance to critique them. By refusing to position them on the political scale, or falsely identifying them as left of center, they are attempting to close the Overton window and prevent a leftward shift in US politics. But that does not mean that we as news consumers have to accept these framings.