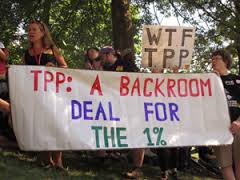 WikiLeaks: We’ve got a job for you

At this very moment, the Trans-Pacific Partnership agreement (TPP)–a trade agreement that could affect the health and welfare of billions of people worldwide–is being negotiated behind closed doors. While 600 corporate lobbyists have access to the text, the press, the public, and even members of the US Congress are being kept in the dark.

But we don’t have to stand meekly by as corporate cronies decide our futures. Concerned citizens from around the world are pooling together their resources as a reward to WikiLeaks if it makes the negotiating text of the TPP public. Our pledge, as individuals, is to donate this money to WikiLeaks should it leak the document we seek.

The Trans-Pacific Partnership (TPP) is a multilateral “free trade” agreement for the Asia-Pacific region which some have taken to referring to as “NAFTA on steroids.” The agreement was originally between just three nations–Chile, New Zealand, and Singapore–with a fourth, Brunei, joining shortly after. Today, seven additional countries are in negotiations to join the agreement: Australia, Peru, Vietnam, Malaysia, Mexico, Canada, and the United States. Eventually, every Pacific-rim nation could be included, making it possible for this trade agreement to affect the lives of billions of people.

The TPP negotiations have taken place under an unprecedented shrowd of secrecy, denying all but a very few any input into the terms of the agreement. The chapters that have been leaked are quite disturbing, revealing plans that would threaten public health, the environment, internet freedom, and the general well-being of perhaps billions of people. Here’s a little taste of what the agreement would include: foreign investor protections that would help corporations offshore jobs, powers that allow multinational corporations to challenge domestic regulations before international tribunals, a strengthening of patent and intellectual property rules which would, among other things, raise the price of life-saving medicines in third world countries, and the ability for Wall Street to roll back safeguards meant to restore financial stability worldwide.