Topics: Pope Francis
In case there was any doubt left, Pope Francis made it clear that he shares little in common with U.S. conservatives.

The pontiff released his Evangelii Gadium, or Joy of the Gospel, attacking capitalism as a form of tyranny and calling on church and political leaders to address the needs of the poor.

“As long as the problems of the poor are not radically resolved by rejecting the absolute autonomy of markets and financial speculation and by attacking the structural causes of inequality, no solution will be found for the world’s problems or, for that matter, to any problems,” the pope said in the 224-page document that essentially serves as his official platform.

Pope Francis said that inequality was the root of social ills, and prayed for world leaders with more empathy and sense of social justice.

“I beg the Lord to grant us more politicians who are genuinely disturbed by the state of society, the people, the lives of the poor!” Pope Francis wrote. “It is vital that government leaders and financial leaders take heed and broaden their horizons, working to ensure that all citizens have dignified work, education and healthcare.”

The pope has already drawn the ire of some conservative Catholics, particularly in the U.S., for his open-minded comments on social issues such as homosexuality, abortion and contraception, and he’s also previously criticized capitalism for promoting greed.

But his latest statements put those concerns into sharper focus – and puts him in sharp contrast to American conservative leaders who prize the unfettered free market and promote the Randian theory of objectivism, or rational self-interest.

“I am interested only in helping those who are in thrall to an individualistic, indifferent and self-centered mentality to be freed from those unworthy chains and to attain a way of living and thinking which is more humane, noble and fruitful, and which will bring dignity to their presence on this earth,” the pope wrote.

END_OF_DOCUMENT_TOKEN_TO_BE_REPLACED

“Americans think the system is rigged. They are ready to throw the bums out. They want to know who will be the change. Who understands how hard it is out there for working families, for the young trying to get started, for older workers headed into retirement without a pension or savings. Who is prepared to take on the special interests, the big banks and the corporate tax dodgers? And who stands in the way?”

“If Democrats are to have any shot in 2014, they have no choice but to be the change. They have to be willing to indict an economy that does not work for working people. They have to call out the special interests and the inside deals. They should be lining up fights – to raise the minimum wage, to close tax havens and use the money to rebuild the country and put people to work, to break up the big banks and censure the Justice Department and regulatory agencies that have failed to hold bankers accountable for the epidemic of frauds and fixes that they used to fleece their customers. They’ve got to move on slamming shut the revolving door that undermines any hope of independent government. And they should make it clear in fight after fight that Republicans are standing in the way.” 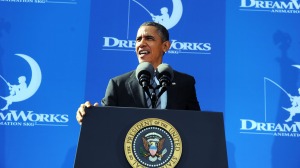 President Obama’s DreamWorks Economy and the Challenge for Democrats

President Obama traveled to Hollywood’s DreamWorks studio to address the economy yesterday.  The speech itself was economical, recycling many of his favorite tropes.  But it revealed the perils Democrats face if they let the president define their agenda and argument over the next months.

Contrary to the current media craze, health care reform isn’t the problem.   Public approval of government, the president, and Democrats has plummeted in the wake of the botched Obamacare launch.  But as the system gets fixed and more and more Americans get access to affordable health care, the foul tempers will calm; the political hemorrhaging will stop.  Supporters may still bear some scars in the 2014 elections but the wounds will have largely healed.

No, the problem is that the president wants to sell this economy.  By next year’s elections, he’ll be in his sixth year and he wants Americans to know that “America has largely fought our way back. We’ve made the tough choices not just to help the economy recovery, but to rebuild it on a new foundation.”

Only Americans aren’t buying:  68% think we are on the wrong track.