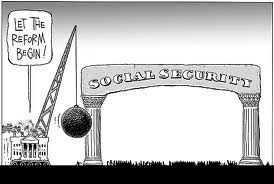 The Neoliberal Attack on Social Security

Among Obama’s principal tasks right now are to reverse his dwindling popularity and to bolster the Democrats’ chances in the the upcoming fall elections. These are not unrelated objectives. He’s got to get people to perceive him as on their side with respect to things that matter, and matter big, to the electorate, and to credibly distinguish himself from the Republicans on these same issues. After all, the cardinal political objective of liberal Democrats is to keep Republicans out of office.

Rasmussen Reports reveals that Obama’s popularity has plunged in the last three months As of Sunday, 43 percent of the nation’s voters “Strongly Disapprove” of his performance as president. Obama’s weekly radio address on Saturday was an effort to endear himself to the gullible by showing that he defends their most fundamental interests against clear and present Republican danger. With titanic irony, he chose Social Security as the issue that makes the difference.

Here is what he said:

“…some Republican leaders in Congress [are] pushing to make privatizing Social Security a key part of their legislative agenda if they win a majority in Congress this fall. It’s right up there on their to-do list with repealing some of the Medicare benefits and reforms that are adding at least a dozen years to the fiscal health of Medicare – the single longest extension in history.

That agenda is wrong for seniors, it’s wrong for America, and I won’t let it happen. Not while I’m President. I’ll fight with everything I’ve got to stop those who would gamble your Social Security on Wall Street. Because you shouldn’t be worried that a sudden downturn in the stock market will put all you’ve worked so hard for – all you’ve earned – at risk. You should have the peace of mind of knowing that after meeting your responsibilities and paying into the system all your lives, you’ll get the benefits you deserve.”

These cynical remarks assume -correctly, one fears- an under- and misinformed public. Obama says he opposes “repealing some of the Medicare benefits”, even as the legislative “reforms” he has defended do just that, in the name of reducing the costs -to business and government, not to working people- of health care.

More audaciously, Obama talks about the threat to Social Security and deliberately misidentifies both its nature and its political agents.

The immediate threat to workers dependent upon Social Security benefits is not privatization, but rather the recommendations of the bipartisan panel to reduce the federal deficit. The panel is Obama’s, not the Republicans’, creation and is packed with opponents of Social Security. (A detailed discussion of the panel, its key members and its reactionary agenda can be found here. ) It is an open non-secret that the panel will recommend, after the fall elections of course, reductions in Social Security benefits and an extension of the retirement age. The fact is that “after meeting your responsibilities and paying into the system all your lives’, you will not “get the benefits you deserve.” That Obama can pretend to be a defender of the most popular social program in US history bespeaks his conviction that most Americans are either unaware of, or capable of being distracted from, his own promotion of an historic assault on Social Security, Medicare and Medicaid.

If the Republicans did not exist, Democrats would have to invent them. The post-Carter Democratic Party’s race to the right is consistently masked by pointing, as Obama did on Saturday, to the more nakedly reactionary Republicans, a small number of whom do indeed press for the privatization of Social Security. But the more savvy privatizers of both Parties are full aware that in the midst of an economic crisis and with an unstable and unpredictable stock market outright talk of privatization will not win hearts and minds. A creeping approach is now the favored strategy of the elite. Twelve years ago it was different. A then-editor of The New York Times, David Brock, wrote an article critical of the Social-Security-is-going-broke alarmists titled “Save Social Security? From What?” (Business section, November 1, 1998, p. 12). Brock attributed the faux hysteria to “hidden agendas…..Wall Street would love to get its hands on at least some of the billions of dollars in the Social Security trust fund . . . But knowing that the idea [of full privatization] won’t fly politically, [politicians] are pushing for partial privatization, in which individuals would invest a portion of their contribution in the stock market, all in the name of rescuing the system.”

That strategy has been rewritten. Partial privatization is at least for now off the page. Who would want to send their FICA obligations off to a stock broker? Reduced benefits and a shorter retirement are the favored starting points, in the name of reducing the deficit. But the Obama boys are too smart to talk about the coming blows to workers. Even as they are in the process of effecting the “reforms”, they’d have you worry about the Republicans. Liberal Democrats think that blaming the Republicans is essential if the Democrats’ constituency is to be made to remain faithful to the Party. That’s what Obama did on Saturday. The political game plan of the organization MoveOn displays this strategy in its unabashed purity.

MoveOn’s website (MoveOn.org: Democracy in Action) says that “The MoveOn family of organizations brings real Americans back into the political process.” In fact MoveOn shils for the Democratic Party. It’s recurrent theme is that the bad Republicans will take over unless we support the high-minded and properly liberal Democrats.

I receive all of MoveOn’s e-mail alerts. Here’s what they sent out on June 30:

Yesterday news broke that John Boehner, the Republican Leader in the House of Representatives, believes that Congress should raise the retirement age to 70 and cut Social Security so that we can finance the wars in Iraq and Afghanistan.

That’s right: Boehner told a reporter that he thinks we should cut Social Security to pay for war. And later in the day, several other Republicans came out and agreed with him…

The way things are looking, Republicans could actually win enough seats this fall to put them in charge and make that vision a reality.”

Republicans, Republicans, Republicans. MoveOn apparently wants you to know that there is a political movement among elites to assault Social Security, but you are to associate this threat with Republicans only. Not a word about alerting the electorate to Obama and his deficit reduction panel. No suggestion that the Democratic faithful announce that the president will lose their vote if he supports the recommendations of the panel. And of course no threat to bounce the president and his minions if they continue to champion “the wars in Iraq and Afghanistan.” (Are they ok with Pakistan?) The whole idea is to keep the flock within the fold. Here is MoveOn’s opposition plan:

“Can you take a moment to print out a sign making clear that you’re against raising the retirement age to 70 and snap a quick photo of yourself with it? We’ll deliver them to Congress and use them in online ads.”

But perhaps I’m being unfair. For in fact MoveOn had informed its members of Obama’s panel and the ideological predilections of its members. In this message of June 14 we find this beautiful example of liberal self-deception:

It sounds like something Glenn Beck would cook up: a powerful cabal of right-wing ideologues hatches a secret plan to force cuts to Social Security and Medicare, and they’re on the verge of succeeding. But it’s true.

Right now, the stars are aligned for conservatives who’ve spent decades trying to cut Social Security—the heart of the New Deal. They’re focusing public anxiety over the economy on the deficit—and even though the deficit is almost entirely a result of Bush cutting taxes for the rich while waging two wars, the “deficit hawks” want us to cut the programs vulnerable Americans rely on to survive—Social Security and Medicare.

And instead of articulating a progressive response, Democrats seem frozen, like deer in the headlights.

Against this backdrop, the President has appointed a “deficit commission” stacked with deficit hawks. Right after the election Congress will vote on the commission’s recommendations.

Why does the deficit commission pose such a threat? Because almost all of its members have interests in seeing cuts to Social Security, Medicare and other safety net programs.

Here’s an introduction to some of the folks on the Commission that we’re up against:

Erskine Bowles, Co-Chair: An investment-banking millionaire who now sits on the Board of Directors for Morgan Stanley and General Motors. Bowles was Chief of Staff for Bill Clinton, where he was called “Corporate America’s Friend in the White House” as he negotiated with Newt Gingrich for how best to cut safety net programs.

David M. Cote: CEO of Honeywell, a defense contractor making millions from the Department of Defense and responsible for costing us millions of dollars in misconduct—including failing to test bulletproof vests sent to US troops.”

The message’s title announces coming Social Security cuts, which are immediately associated with Glenn Beck, “ a powerful cabal of right-wing ideologues hatch[ing] a secret plan to force cuts to Social Security and Medicare”, and “conservatives who’ve spent decades trying to cut Social Security”. It’s not that MoveOn absolves the Democrats. It simply portrays them as passively unresponsive, “frozen, like deer in the headlights” in the face of aggressive “right-wing ideologues”.

But don’t they acknowledge that Obama himself appointed a deficit panel “stacked with deficit hawks”? They do, but this has happened “against this background” of unremitting Republican activism. MoveOn urges the president to cease yielding to Republican pressure.

But Obama’s neoliberalism is his own, not a response to external pressure. He made it clear before his election that he holds the New Deal and the Great Society in derision, and regards Ronald Reagan as America’s most prophetic post-War president. Were MoveOn a genuinely “progressive” organization its central task would be to mobilize the electorate in organized resistance to the president’s and his Party’s neoliberal agenda.

MoveOn’s comments above on Erskine Bowles’s dirty work when he was Bill Clinton’s Chief of Staff illustrates perfectly the shifty means by which liberal organizations attempt to exculpate the Party and its leadership.

We are told by MoveOn that Bowles “negotiated with Newt Gingrich for how best to cut safety net programs.” It is as if this were done behind Clinton’s back. But the left-liberal economist Robert Kuttner, in his 2007 book The Squandering of America, detailed how Washington elites of both Parties had been planning to weaken Social Security since the Clinton Administration. Clinton’s Treasury Secretary Robert Rubin prodded the president to cut a deal with Newt Gingrich to partially privatize Social Security. Clinton appointed Bowles as his intermediary. But in the plan’s initial stages the Monica Lewinsky scandal erupted, causing both embarrassed Congressional Democrats and Gingrich to distance themselves from Clinton. The plan fell apart. Kuttner’s account has been filled out in greater detail in Steven Gillon’s 2008 book The Pact, in which letters and interviews with reliable sources illustrate the means by which Clinton and Gingrich would work to get Congress behind the partial privatization plan.

Republican-bashing seems beside the point and distracting. This is a Democratic administration whose neoliberal bona fides is beyond question. The Republicans are doing what we expect them to do. The Democrats put themselves forward as a meaningful alternative. But they are no such thing. The task is to expose the Democrats for what they are and to urge that the Democrats-or-Republicans alternative is not written in stone.

Alan Nasser is Professor Emeritus of Political Economy at The Evergreen State College in Olympia, Washington. He can be reached at nassera@evergreen.edu