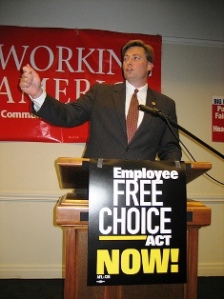 Congressman Jason Altmire got an earful at the Feb. 17 “Town Meeting’ on transportation issues held at Beaver County Community College, with some voices straying beyond the official agenda. But then, that’s what the representative from PA’s 4th CD called for when he launched sessions around the district inviting public participation.

The topic was Pennsylvania’s roads, bridges and traffic patterns, and how to keep the state, district and county from being shortchanged on all fronts. But it widened to include environmental protection, youth unemployment, racism in hiring, high-speed rail, rebuilding lock and dams, and general praise for President Barack Obama’s stimulus package. END_OF_DOCUMENT_TOKEN_TO_BE_REPLACED

“They found money to pay the lawyers, and they still won’t pay us? It is outrageous.” –Michelle Batchelor, Hopewell Township, former operating room nurse at Commonwealth Medical Center.

PITTSBURGH, Feb 18, 2009 – The company that holds the checkbook for the bankrupt Commonwealth Medical Center found money to pay the attorneys who represent many of the hospital’s creditors — but the folks who worked for the hospital in the weeks before it closed are still waiting to hear when they’ll get their money.

Despite assuring everyone involved that there would be an agreement in place to ensure that those checks would be forthcoming, an attorney representing Bridge Healthcare Finance — the primary creditor in the case and the firm that controls whatever money is spent by the hospital — pulled back from those discussions, with the exception of finding about $20,000 for paying other lawyers involved in the case.
END_OF_DOCUMENT_TOKEN_TO_BE_REPLACED