Sara Innamorato:  Our Democratic Socialist in Harrisburg  Sticking Up for All of Us. 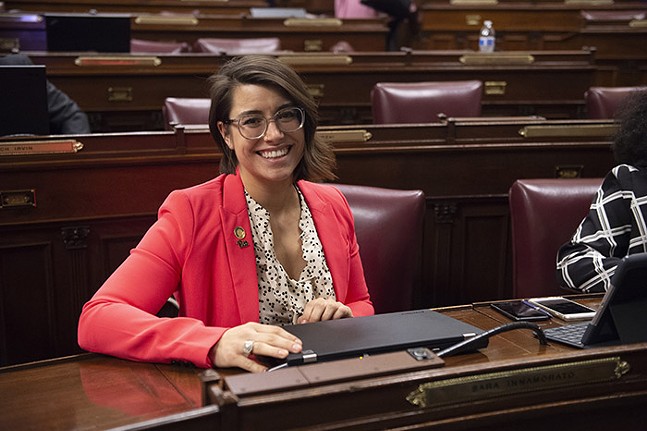 Frb 14, 2020 – Everyone who grows up in Pittsburgh can narrate the rise and fall of the steel industry: the mills grew as immigrants arrived to take jobs in the blast furnaces, then the Great Strike occurred where industry titans ordered deadly violence upon workers calling for better wages and working conditions; later, the series of federal trade agreements were created, culminating with the North American Free Trade Agreement (NAFTA), that sold out the workers and shut down the mills.

Our city’s population declined by half. Our family-sustaining union jobs crumbled, and our neighborhoods with them. But Pittsburghers are tough — we don’t like to complain, we’ve seen worse. And so we persevered and we adapted, and now Pittsburgh is widely seen as a success story. There is a sense of collective pride in our story of resiliency.

The voters I spoke with, like so many of us in Southwestern Pennsylvania, had watched as previous trade agreements, like NAFTA, pushed local jobs overseas and drove down wages for the jobs that remained. People were fed up, and many voted for President Trump because he said he would “never sign any trade agreement that hurts our workers.”

I am no supporter of President Trump, but for the sake of the people I represent in Allegheny County, I had hoped this was a promise he would keep. Unfortunately, when he signed the United States Mexico Canada Agreement (USMCA) on Wednesday, he broke that promise, betrayed those voters, and sold out Southwestern Pennsylvania.

Progressives successfully fought for and secured several key improvements to Trump’s original deal. But for the Pittsburgh region, which has gone from 382,000 manufacturing jobs to 85,000 over the past few decades, a bit better simply isn’t good enough.

Despite what some politicians will tell you, trade deals don’t have to be about protecting corporate interests. Done right, trade deals can actually foster broad-based economic security and growth.

Trade deals don’t need to undercut workers; they can empower them. They don’t need to facilitate a global race to the bottom; they can set new and strong global floors. And they don’t need to help corporations move jobs from Allegheny County; they can open up new markets for local businesses that are paying their workers a living wage.

So when I go knocking on doors in the coming months, I’m going to keep talking to people about the issues I work on in Harrisburg. But I’m also going to talk to them about what our federal politicians need to do to make the next trade deal work for Southwestern Pennsylvania.

I’m going to talk to them about how trade deals need to do more to establish minimum labor and environmental standards. We are working hard to raise workers’ wages here in Southwest Pennsylvania and prevent corporations from polluting our air and water, and it’s simply wrong to allow corporations to shop around for countries that undercut us and don’t share these values.

I’m going to be talking to them about how trade deals need to reign in corporate monopolies. I was shocked when I learned the USMCA continued the practice of using international trade agreements to protect multinational corporations abusing monopolies to pad their profits. Despite some progress made in USMCA, our other trade agreements lock in high prescription drug prices by extending patents, which will contribute to skyrocketing costs and undermine access to life-saving drugs.

That needs to end.

I’m going to be talking to them about how trade deals need to stop giving corporations an advantage over democracies. The USMCA, like NAFTA before it, includes carve outs for private tribunals to settle disputes between massive multinational companies and governments. But corporations should never be put ahead of people, and this is just one blatant example of how trade deals like USMCA get this backwards.

And finally, I’m going to be talking to them about how we need a transparent and democratic process for drafting and approving trade agreements. The USMCA, like every other trade deal in recent years, was put together behind closed doors by negotiators more concerned with the interests of corporations than local workers. That is wrong, and we can do a lot better.

I ran for office because I believe that politics have been too disconnected from the people it is supposed to serve. Those neighbors who told me they voted for President Trump because they thought he would fight for them and disrupt the status quo also told me they were supporting me for the same reason. President Trump betrayed that trust when he signed the USMCA, but I’m going to keep working every day to restore trust in government and make sure that it’s working for every family in my district, not just the wealthiest few.

State Rep. Sara Innamorato is a Democrat representing state House District 21, which includes Bloomfield, Lawrenceville, Millvale, Sharpsburg, Etna, Aspinwall, and Ross. She is also a DSA member and lives in Lawrenceville and has been serving since 2018.