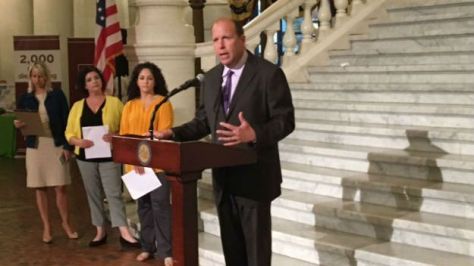 Dec 18, 2017 – NORRISTOWN, Pa. (CBS) — State Sen. Daylin Leach will not step down from his seat in the legislature, but he is suspending his run for Congress in the wake of accusations of sexual harassment of staffers.

Leach says he will step back from his congressional campaign to focus on his family and to work with Senate leaders to address the allegations.

He says he will fully cooperate as the allegations are all vetted.

“While I’ve always been a gregarious person, it’s heartbreaking to me that I have put someone in a position that made them feel uncomfortable or disrespected,” Leach said in a statement Monday. “In the future, I will take more care in my words and my actions, and I will make it my top priority to protect those who to speak up to help change the culture around us.”

Leach was seeking the Democratic nomination in next fall’s congressional race for the seat currently held by Pat Meehan.

Pennsylvania Gov. Tom Wolf called on Leach to resign after the allegations were published and says he does not think that was premature.

“I think Daylin Leach has done a fine job as a senator, but I think we need to make a statement about what kind of society we are and what kind of a commonwealth we are,” said the governor. “I’ve had zero tolerance for this back when I was in the private sector and zero tolerance for it in the executive branch. This is not something that anybody, male or female should be forced to subject himself or herself too in the course of doing a job. It’s wrong.”

But Leach says he plans to keep his seat in the state legislature, adding, “I will continue to do all that I can to advance progressive causes in the Senate and represent my constituents with honor.”