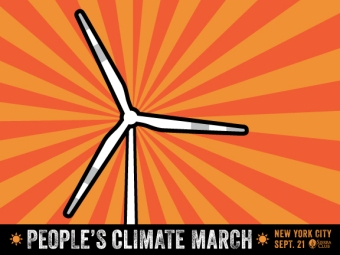 The Connecticut State Council of Machinists delegates who voted to support the March represent more than 10,000 active and retired Machinists Union members in Connecticut from industrial sites including Pratt & Whitney, Hamilton Sundstrand, Electric Boat, Stanley Works and other IAM-represented workplaces around the state.

CT State Council President John Harrity said: “Let’s be clear. Climate change is the most important issue facing all of us for the rest of our lives. And as the resolution points out, working families and the poor will bear the brunt the catastrophic consequences we are already beginning to experience.”

Harrity continued, “I am proud of the CSCM delegates, and their clear understanding of how crucial this issue is. I am hoping that hundreds of Connecticut Machinists can make the short trip to New York for this historic event. When our kids, and grandkids, ask ‘What did you do to help stop this disaster?’ which they will surely ask if we do not take drastic steps immediately – Machinists Union activists can say, ‘We helped save the world. We were there on September 21.’”

Here is the text of the Connecticut Machinists’ resolution:

RESOLUTION IN SUPPORT OF THE PEOPLE’S CLIMATE MARCH

WHEREAS, world leaders are coming to New York City on September 23 for a historic United Nations summit on climate change and Secretary-General Ban Ki Moon will call for governments to agree on an ambitious agreement to reduce greenhouse gas emissions before the end of 2015; and

WHEREAS, an unprecedented array of groups representing climate, economic justice, environmental justice, human rights, labor, faith, and the arts are uniting for the People’s Climate March on Sunday, September 21; and

WHEREAS, the rapidly changing climate is impacting union members and working communities in New York as we experienced firsthand with the devastating impacts of Sandy; and

WHEREAS, we recognize that working people will suffer disproportionately from the current patterns of investment and neglect that do not prioritize good jobs, clean air, and healthy communities;

THEREFORE BE IT RESOLVED, to endorse the People’s Climate March and support the demand for an ambitious, binding, and fair agreement for emission reductions to foster a sustainable adaptation to the effects of climate change; and

BE IT FURTHER RESOLVED, to encourage union members, and also their families and friends, to participate in the march as proud union members and also encourage participation in the other events around the UN Climate Summit on September 23rd movement to address the challenge of climate change.