March on House GOP Offices, Pray for End to Shutdown

Washington, DC – Today, over 70 prominent religious leaders joined with locked-out federal workers in a pilgrimage, marched on key House GOP offices – including Leadership – and urged an immediate end to the government shutdown. At each office, the group prayed for the Member to do what is right and vote to immediately end the shutdown with a clean and unconditional continuing resolution and to raise the debt ceiling without preconditions.

During the Pilgrimage, faith leaders invited moderate Republicans to join them in challenging their colleagues who are putting political agendas ahead of the common good.

An extreme faction of Congress is recklessly playing politics with the lives of countless Americans: seniors seeing “Meals on Wheels” cut, pregnant women and infants losing vital nutrition support, workers locked out of their jobs as bills pile up, veterans facing benefit cuts, and communities put in peril by the suspension of crucial environmental protection efforts.

The marchers also included low-wage workers locked out of their jobs by the shutdown.

END_OF_DOCUMENT_TOKEN_TO_BE_REPLACED

States across the country are being told to stop the supplemental nutrition assistance program for the month of November, pending further notice.

That’s according to a letter from the U.S. Department of Agriculture. (See letter below.) Fox 13 obtained a copy from the Crossroads Urban Center in downtown Salt Lake City. Crossroads says if families don’t get food stamps, they’ll turn to the local food pantries, which are already strapped due to the government shutdown. Homeless people Fox 13 talked to, some who use SNAP, say losing food stamps would mean going hungry.

“This is going to create a huge hardship for the people we serve here in our food pantry,” says Bill Tibbits who is the Associate Director at Crossroads Urban Center.

People out on the streets like Richard Phillips says, “It could impact us and it’s going to cause problems because you’re going to come to find out that people are going to steal and do what they have to do to survive.”“People out here are going to go without food,” says Loralee Smith whose been homeless since August and says the uncertainty is making her uneasy about where her next meal will come from. “I’m on food stamps, I don’t know if I’m going to get them, a lot of people are on food stamps and they don’t know if they’re going to get them.”

Others say if SNAP shuts down, they’ll find a way to feed themselves.

“There’s always food pantries to go to, to get food,” says Mason who is homeless and relies on food stamps. However, Crossroads says there’s no way they could handle the increase if food stamps go away.

“We’ll be affected because if people, if a family doesn’t get food stamp benefits, they’re going to come here,” says Tibbits. “Wee can’t, there’s no way we could deal with it.”

The local pantries are already feeling the pinch because WIC, a federal program which provides baby formula and food to families in need has been affected by the shutdown. With SNAP on the chopping block temporarily, Crossroads fears their shelves will soon be empty. 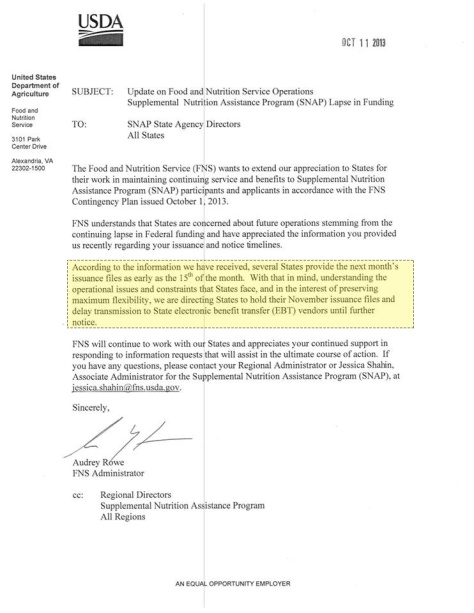 With the ugly government shutdown headed into its third week, Senate leaders are said to be close to a deal that could avert the unimaginable – the default on U.S. debt that could easily drive the world economy into depression.

Even if senators reach a deal today, it is yet unclear whether House Speaker John Boehner will bring it to a vote in the House. Republicans may be plummeting in the polls, but the jihad faction of the Republican House remains unrepentant. Rep. Raul R. Labrador (R-Idaho) denounced Senate Republicans for “pussyfooting around” in the budget battle, scorning them for “always wanting to have a fight the next time.” With Tea Party members threatening a primary challenge for anyone who votes for the potential deal, Boehner will have to bring forth a measure likely to be opposed by a majority of his caucus and relying on Democratic votes to pass.

The House zealots are certifiable, but they set up the age-old good cop/bad cop routine for Senate Republicans. Republicans are plummeting in the polls. Anyone with a clue – which may barely reach a majority in the Republican caucus – knows that forcing a default on U.S. debts is utterly self-destructive folly. But Republican Senate leader Mitch McConnell uses the Tea Party’s fulminations to seek more concessions from Democrats.

So before hailing the rescue, it is worth considering what a sensible outcome to this contrived crisis would be.

First, a minimum requirement would be to end the hostage-taking that uses the threat of default to extort concessions. At the least, that would require lifting the debt ceiling to a level that would cover debts that Republicans have already voted for through the end of next year – and after the midterm elections, when voters can make their views known.

Second, a sensible agreement would reopen government for the year, funded at a level somewhere between that proposed by the Republican House and the Democratic Senate. The figure would be far below what is needed to get the economy going, but would at least keep the doors open.