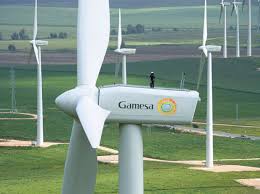 PITTSBURGH (September 25, 2012) Local labor and environmental leaders today joined a furloughed worker from wind turbine-maker Gamesa at the Energy Innovation Center in Pittsburgh to call on Congress to support an immediate extension of the Production Tax Credit. The lack of action on the 2.2-cent per kilowatt-hour tax incentive for wind energy — set to expire at the end of the year — was directly blamed by Gamesa for their decision to institute furloughs at two plants in Pennsylvania, including the plant of Ryan Motel, a United Steelworkers Local 2635 member who is currently on furlough.

“My job is at stake, but so are the jobs of many others,” said Motel. “If companies aren’t building wind farms because they’re not sure what their return on their investment will be, they aren’t buying our blades. My message to Congress is simple: end this uncertainty, save my job, and save the jobs of thousands of people like me across the country.”

Gamesa employs approximately 900 workers in the U.S., with 800 of those jobs in the state of Pennsylvania. Earlier this summer, 165 workers at two plants — in Fairless Hills in Bucks County and Ebensberg in Central Pennsylvania — were given notice that they were being furloughed due to lack of demand and the company attributed that directly to lack of certainty on the fate of the Production Tax Credit

Motel will join other workers in the wind industry in Ohio, Virginia and Michigan to call on Congressional leadership to bring the Production Tax Credit up for a vote in the U.S. House of Representatives.

The American Wind Energy Association estimates that the Production Tax Credit will allow the wind industry to grow from the current 75,000 jobs to 500,000 jobs by 2030. Extending the Production Tax Credit through 2016 would increase total wind-supported jobs to 95,000, with total wind investment growing to $16.3 billion. However, without an extension, America stands to lose 37,000 jobs.