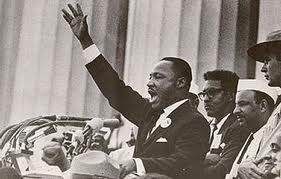 King, whose legacy is honored nationally next week, often spoke of the link between organized labor and the civil rights movement. He recognized that the cause of freedom needed allies, and that unions such as theAmerican Federation of State, County and Municipal Employees and the United Auto Workers were key allies in the struggle. The unions shared in that recognition, and do to this day.

Unions from the North were strong enough to provide meaningful support for the civil rights struggle because right-to-work laws had been blocked in the Northern states arrayed around the Great Lakes and into New England. Like the vast majority of states that fought to end slavery in the 19th century, and that elected representatives (Republicans and Democrats) who opposed segregation in the 20th century, Wisconsin, Minnesota, Michigan, Ohio and Indiana rejected proposals to limit collective bargaining rights. Democrats and Republicans in these states recognized that strong unions, like strong businesses, were necessary to economic and social progress.

Now, however, Republicans in traditionally pro-labor states have begun to attack the rights of workers and their unions. Wisconsin Gov. Scott Walker and Ohio Gov. John Kasich went after public-sector unions, signing laws that took away collective bargaining rights from teachers, nurses, snowplow drivers and, in Ohio’s case, firefighters and police officers. Ohio reversed the assault at the polls last November, voting 61-39 percent to overturn Kasich’s law, and Wisconsinites will on Tuesday announce that they have collected more than enough signatures to force Walker and his cronies to face a 2012 recall election.

But even as some states are pushing back against the anti-labor agenda, others are moving to embrace it. Republican candidates for president are promoting platforms packed with anti-labor proposals; indeed, even as we recall Dr. King’s legacy, Mitt Romney is running ads in South Carolina defending right-to-work laws and attacking the National Labor Relations Board.

Republican legislatures in Indiana and New Hampshire have taken the lead in trying to pass right-to-work laws in those states. A right-to-work proposal could well end up on Ohio’s November ballot, and Wisconsin Senate Majority Leader Scott Fitzgerald, R-Juneau, has actively discussed moving to make Wisconsin a right-to-work state.

These legislators are not motivated by a desire to create jobs or aid industry. The agenda is purely political. They want to weaken unions because labor organizations and collective-bargaining laws give working families a voice in the electoral process. At a December 2010 forum, Wisconsin’s Fitzgerald bluntly discussed using new Republican majorities to attack organized labor, advancing the theory that “the more feathers you ruffle right now, the stronger you’re going to be politically.”

Where did Kasich, Walker, Fitzgerald and other Republican leaders from Ohio, Wisconsin, New Hampshire and states along the country’s Northern tier get these ideas? Not from their constituents. Rather, they jetted off to conferences of right-wing governors (where former Mississippi Gov. Haley Barbour and Louisiana Gov. Bobby Jindal served up the policy gumbo) and legislators — including gatherings of the corporate-funded American Legislative Exchange Council. It was not in Wisconsin but rather at an ALEC session in Washington where Fitzgerald said he was “surprised (at) how much momentum there was around that discussion” of enacting right-to-work laws.

The fierce opposition seen during 2011 to attacks on collective bargaining rights in Wisconsin, Indiana, Ohio and other Northern states confirmed that the anti-union “momentum” is not coming from workers in those states. They know that restraints on public-sector unions and right-to-work laws have harmed the quality of wages and benefits, undermined workplace safety, and limited the voice of working people in the public spheres of states such as Alabama and Mississippi. They know today, as the Rev. Martin Luther King Jr. did in 1968, that embracing the race-to-the-bottom mentality favored by Wall Street speculators and hedge-fund managers prevents the arc of history from bending toward economic and social justice.

King’s last march was with African-American public employees in Memphis, who were oppressed not just by segregation but by right-to-work laws that were written with the purpose of keeping workers divided and powerless. We honor King today by opposing the new push for right-to-work laws in Northern states and by campaigning to overturn the right-to-work laws passed decades ago by the Jim Crow legislatures of Southern states that were determined to prevent the arc of history from bending toward justice.

This article was published at NationofChange at: http://www.nationofchange.org/right-work-and-jim-crow-legacy-affronts-king-s-memory-1326730734. All rights are reserved.