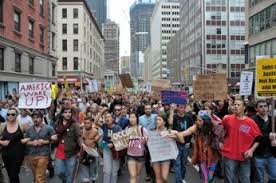 “The United Steelworkers (USW) union stands in solidarity with and strongly supports Occupy Wall Street. The brave men and women, many of them young people without jobs, who have been demonstrating around-the-clock for nearly two weeks in New York City are speaking out for the many in our world. We are fed up with the corporate greed, corruption and arrogance that have inflicted pain on far too many for far too long.

Our union has been standing up and fighting these captains of finance who promote Wall Street over Main Street. We know firsthand the devastation caused by a global economy where workers, their families, the environment and our futures are sacrificed so that a privileged few can make more money on everyone’s labor but their own.

Wall Street and its counterparts on Bay Street (Toronto), The City (London) and across the world tanked our economy in 2008. They caused a crisis that we’re still suffering from – record job losses, home foreclosures, cuts to schools, public services, police, fire and so much more. They’ve gambled with our pension funds and our futures for far too long.

They should have gone to jail. Instead, they got bailed out, while we got left out. And now they want us to go down the same path.

The Occupy Wall Street movement represents what most Americans believe: Enough is enough! It’s time to hold those who caused our economic crisis accountable, to ensure they don’t get away with it again, and to demand that everyone pay their fair share. It’s time to stand and fight for the creation of real wealth by focusing on making real things and creating family- and community-supporting jobs.

The USW is proud to join with the brothers and sisters of the Occupy Wall Street movement as we continue this important fight for a more just economy and a brighter tomorrow.”

The United Steelworkers is the largest industrial union in North America and has 850,000 members in the U.S., Canada, and the Caribbean. It represents workers employed in metals, rubber, chemicals, paper, oil refining, atomic energy, airline, health care, public sector and the service sector. For more info: http://www.usw.org .