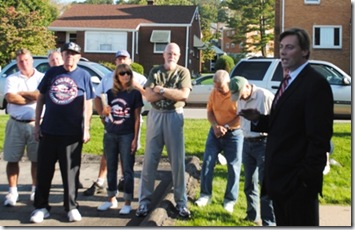 at Rep. Altmire’s Office to Stop

Fifty postal workers and their allies rallied outside the Aliquippa office of Congressman Jason Altmire on the afternoon of Sept 27. They joined postal workers around the country demanding changes in special accounting rules imposed on them by Congress. The cost of the rules threatens to end Saturday deliveries, lay off 120,00 workers and close many post office facilities across the country.

“Congress created this problem and Congress can fix it,’ states a USPS TV ad explained the problem. Unlike any other agency, the are required to overpay billions of dollars into their pension fund by the same amount that it would take to clear up the Post Office’s current deficit.

“They could fix this problem with the stroke of a pen and not cost the taxpayers a penny,’ said Charlie Hamilton, a retired mail carrier and Labor Council member who organized the rally. “But the Republicans are determined to destroy anything with ‘public’ in it connected to the government.”

Altmire spoke briefly to the gathering, saying that he agreed with them, and would back legislation to support them. He warned, however, that the fight would be hard.

“What’s with Issa? Why is he doing this?” shouted one of the workers in a question to Altmire. He was referring to California GOP Rep. Darrell Issa, the House leader of the drive against the Post Office.

“We have a block of people in Congress with the ideology that government shouldn’t do hardly anything, that wants private businesses to take over things like the Post Office. They’re a minority, but they’re what’s making it a tough fight.”

The workers were glad to get Altmire’s support on the issue, but many were still wary due to his recent ‘Blue Dog’ votes with the GOP on other budget matters.