The raw deal on the budget ceiling has been cut. The Tea Party terrorists – the extremist faction willing to hold the economy hostage to get their way – have won. The Republic, common sense and decency have been trampled.

With the economy deeply depressed, 25 million people in need of full time work, the raw deal will impede any recovery. It precludes any serious action on jobs from the federal government. It will cost jobs as spending is cut. Instead of getting serious about a plan to revive this economy and put people back to work, Washington will remain fixated on what and how much to cut. From the President to the Tea Party zealots, politicians will tell Americans that this agreement is “important to our economy.” Yes, it is important – important in the way a virus is important to a sickly patient. It will make things worse.

END_OF_DOCUMENT_TOKEN_TO_BE_REPLACED 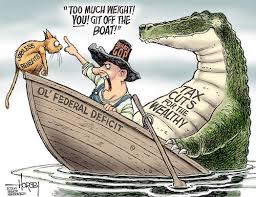 Leave it to the New York Times to look for a silver lining in the dark cloud of a Wall St-right wing victory on ‘The Deal’ over the phony budget crisis.

“Democrats can look forward to the expiration of the Bush tax cuts next year,” says their Aug 1, 2011 editorial, “and will have to make the case in the 2012 elections for new lawmakers who will undo the damage.”

In other words, the bondholders will be paid on time, the markets will be stabilized for a short time, and matters will continue to get worse for the jobless and the rest of us. Tighten your belt another notch and get used to it. As for 2012, you have ‘nowhere to go’, so don’t expect much.

END_OF_DOCUMENT_TOKEN_TO_BE_REPLACED

A deal to raise the federal debt ceiling is in the works. If it goes through, many commentators will declare that disaster was avoided. But they will be wrong.

For the deal itself, given the available information, is a disaster, and not just for President Obama and his party. It will damage an already depressed economy; it will probably make America’s long-run deficit problem worse, not better; and most important, by demonstrating that raw extortion works and carries no political cost, it will take America a long way down the road to banana-republic status.

The worst thing you can do in these circumstances is slash government spending, since that will depress the economy even further. Pay no attention to those who invoke the confidence fairy, claiming that tough action on the budget will reassure businesses and consumers, leading them to spend more. It doesn’t work that way, a fact confirmed by many studies of the historical record.