“No Fracking Way! No Fracking Way!” was the chant resounding off the steel, granite and glass walls in downtown Pittsburgh on the sunny afternoon on Nov. 3, as nearly 500 environmental activists headed for the David Lawrence Convention Center. Their target was a gathering of 2000 natural gas drillers being addressed by Karl Rove, advisor to former President George W Bush.

Inside, the industry executives were meeting to discuss the “future” of hydro-fracking gas drilling and planning to use heavy explosives to blast apart the 4000-foot-deep Marcellus Shale formation to get the natural gas beneath.

“Only a dying soul,” said Stephen Cleghorn, “can contemplate the destruction of life that they’re discussing in that building right now!” Cleghorn is Reynoldsville, PA farmer, and his views reflected those of many semi-rural residents of Pennsylvania and other nearby states, where water was polluted and cattle died.

“They promise people all sorts of money,” said Bob Schmetzer, “but what’s your home worth if you have bad water? Nothing!” Schmetzer, carrying a placard demanding ‘prosecute the polluters,’ is the council president of South Heights in Beaver County, and the vice president of the 4th CD Progressive Democrats of America.

END_OF_DOCUMENT_TOKEN_TO_BE_REPLACED

Elections always yield a cascade of numbers that nerds such as I rummage among in search of meaning. Here are a few that I think help explain Tuesday’s results:

zero – The number of newly elected Republican senators in genuinely contested Senate races (excluding, therefore, those like North Dakota’s) who carried voters ages 18 to 29. Republicans may have picked up seats in Pennsylvania, Illinois and Wisconsin, and held them in Missouri, New Hampshire and Ohio, but young voters in those states voted Democratic. Even in Ohio, where Republican Rob Portman beat Democrat Lee Fisher by 18 percentage points, Fisher won the youth vote 49 percent to 45 percent. In the national exit poll on House voting, the Republicans lost the 18-to-29-year-olds by 17 points, and did better the older the voters got. Moral: There was absolutely a Republican wave on Tuesday, but it looks more like the wave of the past than the wave of the future. Then again, as Faulkner reminded us and as the Republicans continually hope, the past isn’t necessarily dead.

1 – The number of white Democratic House members in the next Congress who will come from the Deep South (Louisiana, Mississippi, Alabama, Georgia, South Carolina). Democrats still send nine members from this long-ago Democratic region to the House, but eight of them are African Americans from districts in which whites don’t make up a majority. Democratic strength in the white South began its downward plunge when Lyndon Johnson signed the Civil Rights Act, but until Tuesday, there were still seven white Democrats in Congress from the Deep South. Now there’s just one, Georgia’s John Barrow.

24 – The gap, in percentage points, between the levels of support for Democrats and Republicans among white voters without college degrees who have union members in their household and white voters without college degrees who don’t. In Tuesday’s national exit poll on House voting, working-class whites voted overwhelmingly for Republicans – unless they lived with or were themselves union members, in which case they supported Democrats by a margin of 55 percent to 43 percent. Working-class voters from nonunion households backed Republican candidates 68 percent to 31 percent – a huge difference. It’s not because unionized UPS drivers and nonunion FedEx drivers, say, are two different species of human. It’s because the unions’ political education and mobilization programs are very effective.

END_OF_DOCUMENT_TOKEN_TO_BE_REPLACED 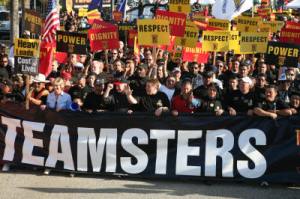 Dave Alters, a member of the union negotiation team, said the three-year contract was ratified in a 42-22 vote, and that it calls for a 10 percent pay increase over the contract term and a signing bonus. The company’s employees voted last April in favor of representation under Teamsters Local 261, based in New Castle.

One reason the negotiations took an extended time was that this was the initial collective bargaining agreement, which forced both sides to start more or less from scratch in creating a new contract. Alters said there were few difficulties in negotiations.

END_OF_DOCUMENT_TOKEN_TO_BE_REPLACED

The Empire Strikes Back: Explaining the Republican Wave

What a difference two years make. In 2008, President Obama swept into office on a platform of hope and change. All across America, there was a ground swell of voices calling for an end to a political system that upholds the powerful special interests that ran America into the Great Recession. In 2010, an empire of big corporate interests fought back, riding a wave of anger and economic dissatisfaction.

There is no disputing the fact conservatives won and progressives lost on Tuesday. There is also no disputing that the frustration percolating across the country over politics in Washington swept in some obviously extremist candidates (Rand Paul Criticizes Civil Rights Act, Argues Businesses Should Be Able to Discriminate). Yet, given the historic level of discontent throughout the nation with Washington politics, it is frankly shocking that the wave against the party in power was not even larger. One thing that did not happen yesterday: Americans did not endorse a conservative Republican agenda. In fact, and paradoxically, exit polling shows that voters expressed even LESS approval of the Republican Party than the Democratic Party. Democrats retained the U.S. Senate and Sen. Harry Reid (Nev.), a symbol of much of what the Democrats accomplished in the last two years and who embraced Obama and the entire hope and change agenda, won re-election with the decisive support of Latinos (an almost unheard of 90 percent of the Latino vote).

What then did happen last night?

Big Money Interests Seize Back Control of the Political System

In 2008, on the heals of an economic collapse caused by tax cuts for the rich, deregulation of profiteering corporations and the financial implosion brought on by the collapse of the vast Wall Street Ponzi scheme, the people fought back for hope and change. Just two years later, the empire has returned with a vengeance. Unleashed by a conservative Supreme Court, independent groups flooded the system with a record amount of special interest money, more than quadruple the last midterm cycle. (In the end, it may exceed $ 1 billion.) These groups, backed by massive multinational corporations, greedy banks and self-interested investment firms vastly outspent progressives (Midterm Elections 2010: An Inside Look At The Outside Group Spending Surge Boosting The GOP).