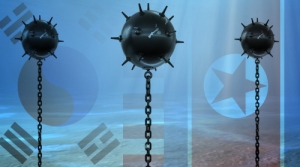 But the articles of proof presented so far by military investigators to an official inquiry board have been scanty and inconsistent.
There’s yet another possibility, that a U.S. rising mine sank the Cheonan in a friendly-fire accident.

In the recent U.S.-China strategic talks in Shanghai and Beijing, the Chinese side dismissed the official scenario presented by the Americans and their South Korean allies as not credible. This conclusion was based on an independent technical assessment by the Chinese military, according to a Beijing-based military affairs consultant to the People Liberation Army.

Hardly any of the relevant facts that counter the official verdict have made headline news in either South Korea or its senior ally, the United States.

The first telltale sign of an official smokescreen involves the location of the Choenan sinking – Byeongnyeong Island (pronounced Pyongnang) in the Yellow Sea. On the westernmost fringe of South Korean territory, the island is dominated by a joint U.S.-Korean base for anti-submarine warfare (ASW) operations. The sea channel between Byeongnyeong and the North Korean coast is narrow enough for both sides to be in artillery range of each other.

Anti-sub warfare is based on sonar and acoustic detection of underwater craft. Since civilian traffic is not routed through the channel, the noiseless conditions are near-perfect for picking up the slightest agitation, for example from a torpedo and any submarine that might fire it.

North Korea admits it does not possess an underwater craft stealthy enough to slip past the advanced sonar and audio arrays around Byeongnyeong Island, explained North Korean intelligence analyst Kim Myong Chol in a news release. “The sinking took place not in North Korean waters but well inside tightly guarded South Korean waters, where a slow-moving North Korean submarine would have great difficulty operating covertly and safely, unless it was equipped with AIP (air-independent propulsion) technology.”

The Cheonan sinking occurred in the aftermath of the March 11-18 Foal Eagle Exercise, which included anti-submarine maneuvers by a joint U.S.-South Korean squadron of five missile ships. A mystery surrounds the continued presence of the U.S. missile cruisers for more than eight days after the ASW exercise ended.

Only one reporter, Joohee Cho of ABC News, picked up the key fact that the Foal Eagle flotilla curiously included the USNS Salvor, a diving-support ship with a crew of 12 Navy divers. The lack of any minesweepers during the exercise leaves only one possibility: the Salvor was laying bottom mines.

Ever since an American cruiser was damaged by one of Saddam Hussein’s rising mines, also known as bottom mines, in the Iraq War, the U.S. Navy has pushed a crash program to develop a new generation of mines. The U.S. Naval Mine and Anti-Submarine Warfare Command has also been focused on developing counterparts to the fearsome Chinese naval “assassin’s mace,” which is propelled by a rocket engine.

A rising mine, which is effective only in shallow waters, rests atop a small platform on the sea floor under a camouflage of sand and gravel. Its detection system uses acoustics and magnetic readings to pick up enemy ships and submarines. When activated, jets of compressed air or solid-fuel rockets lift the bomb, which self-guides toward the magnetic center of the target. The blast rips the keel, splitting the ship or submarine into two neat pieces, just as was done to the RKOS Cheonan.

A lateral-fired torpedo, in contrast, “holes” the target’s hull, tilting the vessel in the classic war movie manner. The South Korean government displayed to the press the intact propeller shaft of a torpedo that supposedly struck the Cheonan. Since torpedoes travel between 40-50 knots per hour (which is faster than collision tests for cars), a drive shaft would crumble upon impacting the hull and its bearing and struts would be shattered or bent by the high-powered blast.

The initial South Korean review stated that the explosive was gunpowder, which would conform to North Korea’s crude munitions. This claim was later overturned by the inquiry board, which found the chemical residues to be similar to German advanced explosives. Due to sanctions against Pyongyang and its few allies, it is hardly credible that North Korea could obtain NATO-grade ordnance.

Thus, the mystery centers on the USNS Salvor, which happened to be yet right near Byeongyang Island at the time of the Cheonan sinking and far from its home base, Pearl Harbor. The inquiry board in Seoul has not questioned the officers and divers of the Salvor, which oddly is not under the command of the 7th Fleet but controlled by the innocuous-sounding Military Sealift Command. Diving-support ships like the Salvor are closely connected with the Office of Naval Intelligence since their duties include secret operations such as retrieving weapons from sunken foreign ships, scouting harbor channels and laying mines, as when the Salvor trained Royal Thai Marine divers in mine-laying in the Gulf of Thailand in 2006, for example.

The Salvor’s presence points to an inadvertent release of a rising mine, perhaps because its activation system was not switched off. A human error or technical glitch is very much within the realm of possibility due to the swift current and strong tides that race through the Byeongnyeong Channel. The arduous task of mooring the launch platforms to the sea floor allows the divers precious little time for double-checking the electronic systems.

If indeed it was an American rising mine that sank the Cheonan, it would constitute a friendly-fire accident. That in itself is not grounds for a criminal investigation against the presidential office and, at worst, amounts only to negligence by the military. However, any attempt to falsify evidence and engage in a media cover-up for political purposes constitutes tampering, fraud, perjury and possibly treason.

Yoichi Shimatsu, former editor of the Japan Times, is an environmental consultant and a commentator on Asian affairs for CCTV-9 Dialogue.

One thought on “Did an American Mine Sink South Korean Ship?”