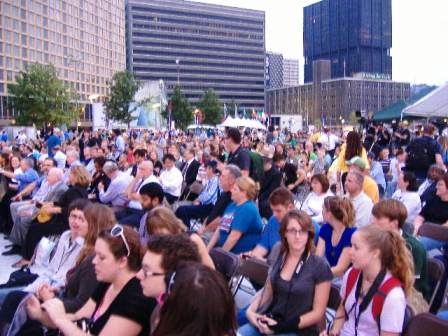 One of the first things you see entering Pittsburgh from the Fort Pitt Bridge is that the United Steel Workers, headquartered in this working-class town, are determined to deliver a strong message to the G20 bigwigs.

“Jobs, Good Jobs, Greens Jobs Now!’ declared the huge five-story-tall banner draped from the top of the  even taller USW headquarters building that faces the Golden Triangle and its hotels. Despite squads of militarized police, some in their Ninja turtle outfits, no one anywhere near the downtown area can miss it.

Today I’m headed for the day-long ‘Teach-In on Human Rights, Global Justice and the G20’ organized by the USW at their 4th floor conference center. Later in the afternoon on this gray, drizzly and humid Sept 23 day, I plan to hear Nobel Laureate Joseph Stiglitz speak in the low-income Hill District, and attend a labor-environmentalist rally and concert featuring local politicians and rockers. END_OF_DOCUMENT_TOKEN_TO_BE_REPLACED

Last night in Pittsburgh, at an event featuring former Vice President Al Gore and a broad coalition of environmental and union leaders, AFL-CIO President Richard Trumka challenged the global heads of state attending the G-20 conference to build a new economic order that protects the dignity of workers and the planet.

The world cannot afford to continue with a globalization that works only for the very richest and leaves workers and the communities they live in behind, Trumka said. While the G-20 leaders meet, unions are issuing a declaration that calls for global action for good jobs:

Together, the labor movement and the environmental movement are a fighting force for change. This is our time—time to let the powers gathered here this week know exactly what we want, and exactly what we won’t stand for. We want a clean energy economy that creates good jobs, and we want a safe and healthy planet.

Trumka noted that Pittsburgh wasn’t revitalized by the type of globalization that exports jobs—Pittsburgh’s growth came despite, not because of, the big banks and global corporations. In the real economy, Trumka said, it takes workers with good, safe jobs to build a lasting prosperity. We can’t go back to business, to the unfair economic system that caused our financial crisis, he said.

Trumka laid out a program of regulation of the finance industry, major public investment in clean energy and transportation, controls on carbon emissions and the freedom for all workers to form a union.