CHICAGO (AP) ― Workers who got three days’ notice their factory was shutting its doors voted to occupy the building and said Saturday they won’t go home without assurances they’ll get severance and vacation pay they say they are owed.

In the second day of a sit-in on the factory floor that began Friday, about 200 union workers occupied the building in shifts while union leaders outside criticized a Wall Street bailout they say is leaving laborers behind.

About 50 workers sat on pallets and chairs inside the Republic Windows and Doors plant. Leah Fried, an organizer with the United Electrical Workers, said the Chicago-based vinyl window manufacturer failed to give 60 days’ notice required by law before shutting down.

During the takeover, workers have been shoveling snow and cleaning the building, Fried said.

“We’re doing something we haven’t since the 1930s, so we’re trying to make it work,” Fried said.

END_OF_DOCUMENT_TOKEN_TO_BE_REPLACED

The Central Oregon Labor Council is the 118th council to endorse HR 676.

“We support the single-payer initiative because we believe quality
healthcare is a human right not a privilege for the rich.  We also believe
that taking the cost of healthcare out of the collective bargaining
equation will help to improve the economic gains of unionized workers and
improve opportunities to expand unionization to unorganized sectors of
working people.  And, the campaign for single-payer healthcare will
provide practical opportunities for creating a national long term
coalition that continues to work for working class reforms.”

We Are Responsible for Br

While the media speculates on President-Elect Obama’s cabinet picks, much of the electorate that put him in office is anticipating decisive action from the government to address the nation’s woes. Progressive Democrats need to focus on how to help bring about the change that the Obama campaign promised. Progressive Democrats of America should adopt a program of concrete steps needed in the first hundred days of the Obama administration to lay the basis for an economic recovery.

Now is the time for mass petitions for single payer healthcare, employee free choice, a peaceful foreign policy, rebuilding the infrastructure, and full funding for college education. It’s important to correlate the tactics of mass action to the stance of the ruling political coalition. It is now time, not to call for mass protest, but mass petition of our newly elected government. Not criticism, but appeals.

500,000 people in Washington DC this coming spring break petitioning Congress for single payer healthcare, employee free choice, full funding for college education, and rebuilding, for example, the crumbling locks and dams on the Ohio River will get the nation moving in the right direction.

END_OF_DOCUMENT_TOKEN_TO_BE_REPLACED

‘There is an emerging consensus among economists that a big – very big – stimulus is needed, at least $600 billion to $1 trillion over two years. Mr. Obama’s announced goal of 2.5 million new jobs by 2011 is too modest. In the next two years, almost four million workers will enter the labor force – or would if there were jobs. Combined with the loss of employment this year, that means we should be striving to create more than five million jobs.’

‘…Americans are rightly afraid of losing their jobs, and with that, their health insurance and their homes. We need to provide health insurance to the unemployed and to the uninsured, and we need to do it quickly, possibly through an expanded and more efficient Medicare.’

Joseph E. Stiglitz, professor of economics at Columbia, chair of the Council of Economic Advisers from 1995 to 1997, awarded the Nobel prize in economics in 2001 and author, with Linda J. Bilmes, of ‘The Three Trillion Dollar War.’
New York Times
November 30, 2008

Thanks to IBEW member Bob Schmetzer for this Article

Q. Why is handing out hundreds of billions of dollars in taxpayer funds OK if the recipients are Wall Street corporations but not OK if they are Midwest automakers?

A. Automakers are unionized.

As discussion about the Detroit auto industry’s requests for a bridge loan roils throughout the media, a strikingly class-based argument has emerged by Republican ideologists, Big Business apologists and others who oppose saving America’s automakers.

Here’s [1] The Jed Report’s take on one such example, that of Republican Rep. Zack Wamp, who seems to have forgotten that his own health care, retirement benefits and other “legacy” perks are paid for by U.S. taxpayers:
END_OF_DOCUMENT_TOKEN_TO_BE_REPLACED

November 22, 2008 – No presidential administration keeps its promises without relentless pressure from below. It’s never happened before, and there’s no reason to expect any different. The popular demand for jobs, peace and justice are the concrete “change” Democratic voters believe in, and what swept Obama and his party to power. The self-made crisis of the US auto industry is the perfect opportunity to make good on two of those promises. It’s not just the first test of whether an Obama administration intends to serve its voters or its wealthy corporate campaign contributors. It’s the first test of whether Obama’s popular base can or will hold the new president and his party accountable for producing the “change” they promised.
END_OF_DOCUMENT_TOKEN_TO_BE_REPLACED

November 15, 2008, Washington, DC – With Barack Obama about to assume the presidency and take up the healthcare issue, leaders of single-payer healthcare organizations met for two days, November 11 – 12, at the AFL-CIO headquarters in Washington, D.C. The California Nurses Association/National Nurses Organizing Committee (CNA/NNOC), Physicians for a National Health Plan (PNHP), Healthcare-NOW! , and Progressive Democrats of America (PDA) convened the meeting. Providing healthcare to the millions of Americans who lack it was a centerpiece of the presidential campaigns.

Approximately sixty people representing over a dozen organizations and three members of Congress were in attendance. The agenda included a political overview, developing a legislative strategy, and alliance-building discussions. Among the represented groups were Healthcare-NOW!, the AFL-CIO, All Unions Committee for Single-Payer, American Medical Students Association, Rep. John Conyers, and aides from the offices of Sen. Bernie Sanders and Rep. Dennis Kucinich.

There was broad agreement among the participants that a single-payer healthcare plan, H.R. 676 specifically, is not only the solution to solving the problem of providing healthcare to every American, but is also a sensible part of any economic stimulus package and lasting economic recovery.
END_OF_DOCUMENT_TOKEN_TO_BE_REPLACED 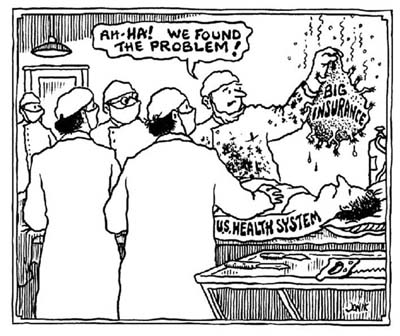 This coming year, our 4th C.D. Chapter of PDA plans to participate in the national Win-Win campaign sponsored by Healthcare NOW, the national coalition backing HR676.

Join us in this new campaign to win endorsements of HR 676 – Medicare for All by local governments – counties, boroughs, townships, and school boards. In a time of fiscal crisis for local governments, saving over 50% of healthcare outlays and getting more healthcare in return is a win-win outcome for taxpayers, employees, and employers.

The employer payroll tax for health coverage under HR676 is considerably less than current local government outlays for health insurance. This is due to the $30 billion savings from eliminating private insurance companies from healthcare. HR 676 means big savings for taxpayers. Also, private and public employees will see an end to co-pays, premiums, and deductibles. And it means expanded healthcare coverage for everyone. See the Charts below:
END_OF_DOCUMENT_TOKEN_TO_BE_REPLACED

Thanks to the thousands of union members and volunteers who gave up countless evenings and weekends to help elect Barack Obama President by an impressive 11 – point margin. Now we enter the next phase of our campaign to Turn Around America with the passage of the Employee Free Choice Act. I look forward to continuing our work together and hope to see you all, across the State.

Heading into the holiday season, CLC Presidents and ALF Chairs look back on our victory on November 4th when the labor movement came out in record numbers to be the difference in Pennsylvania and Barack Obama and other AFL-CIO endorsed candidates. It is important to remember that election day was just the beginning and that now that we have a president elect who will sign the Employee Free Choice Act into law the real work starts:

“The election results on November 4th were a great success for the labor movement,” said Dave Antle, Northeast Area Labor Federation Chair and AFSCME District Council 87 Director.  “On a local level we re-elected Congressman Kanjorski and Congressman Carney, and on the national level we elected Barack Obama, a president who will sign The Employee Free Choice Act to law when it reaches his desk.  This is all thanks to the hard work of union members and their families who volunteered with the Labor 2008 program.  Because you were out talking to your fellow union members on labor walks, over the phone at member phone banks, through local union mail and at the work place with leaflets we were able to get our message out to working families and elect candidates that care about our issues.  Though our work is far from over, on November 4th we came together as a movement and made the first step in turning America around by voting for our own interests and electing Barack Obama as the next President of the United States.”
END_OF_DOCUMENT_TOKEN_TO_BE_REPLACED

Portland, Oregon.   Teamster Local 206, which represents workers in a
variety of occupations through out the state of Oregon, has endorsed HR
676, single payer healthcare legislation introduced by Congressman John
Conyers (D-MI).

Tom Leedham, Local 206 Secretary-Treasurer said: “Members of our union are
very involved in health care and have studied a number of proposals for
reform both at the state and national levels.  Health care and health care
issues are often the subject of discussion at our general and contract
ratification meetings.  Because we enjoy a high quality schedule of
benefits we are not inclined to support a proposal that would be a
reduction in benefits or an increase in costs for 206 Teamsters.  A
national single payer plan like HR 676 is the only program we see that
meets our quality and cost criteria.  HR 676, like no other, is consistent
with our union’s overall philosophy: ‘everybody in, nobody out’.