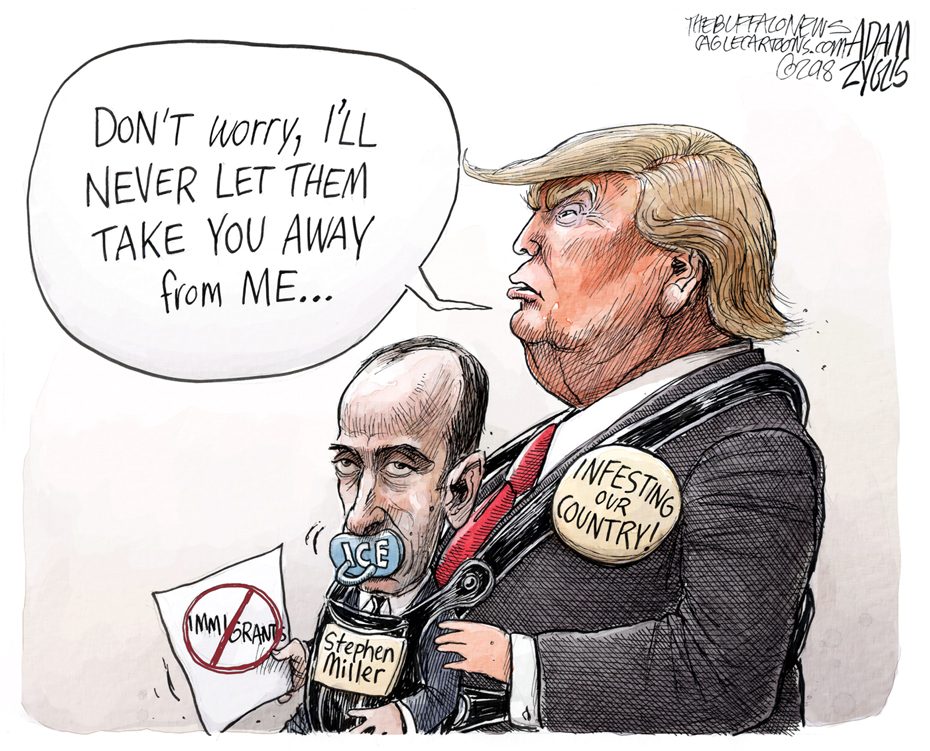 In any other administration, the existence of 900 emails exposing a senior aide’s secret life as a cheerleader for white nationalism would’ve resulted in a full-throated rebuke, a swift firing and a televised escort from the White House grounds by the blackest Secret Service agents on staff.

Instead, an anonymous White House official told The Daily Beast that “Stephen is not going anywhere” and that “the president has his back.” White House press secretary Stephanie Grisham used a variation of the “consider the source” argument by calling the SPLC “an utterly-discredited, long-debunked far-left smear organization” that was “beneath public discussion.”

What Ms. Grisham and the White House didn’t do was attempt to refute the 900 emails. All of this lends credence to the theory that Mr. Miller’s white nationalist ideology, far from being a disqualification for a job in the White House, is what contributed to his getting hired in the first place.

Why would Mr. Trump fire one of his closest aides for attempting to halt the so-called “browning of America” that will result in a majority-minority country by the early 2040s?

Having an unadulterated bigot helping to craft immigration policy at the highest levels is the point of Mr. Miller’s presence in the Trump White House. Far from being embarrassed by Mr. Miller’s proximity to the president, the administration will use him as a human dog whistle to attract voters on the racist right.

What we know of Mr. Miller’s emails so far reveal him to be a white grievance merchant who had an endless supply of story suggestions for a website on the prowl for affronts to white dignity.

One of his bright ideas was to sic a Breitbart reporter on Amazon.com after the online marketplace decided to stop selling Confederate battle flags after a young white supremacist, enamored of the Lost Cause and its symbols, slaughtered nine congregants of a black church in Charleston, S.C., in 2015.

Mr. Miller also pushed to make sure that a racist French novel called “The Camp of the Saints” got as much exposure in Breitbart as it was getting on unaffiliated white nationalist websites.

The SPLC released the first in what it says will be a series of reports exposing Mr. Miller’s ties to the website, so even more examples and outrages are on the way.

No one expects Mr. Trump to suddenly be appalled by a fellow dabbler in the politics of racial intolerance. Given the moral relativism of a president who can see “very fine people” on both sides of the Charlottesville, Va., clash that resulted in a peaceful protester being murdered by a neo-Nazi, it would be asking too much for him to summon the empathy required to understand why embracing racism is bad for America.

The fact that Mr. Miller has absolutely no fear of losing his White House gig despite the existence of hundreds of emails that reveal his antipathy for the rights of racial and religious minorities in this country and the ideals of universal equality is astonishing.

Mr. Miller, who is part Jewish, insists that lumping him in with the bigots of the alt-right because of his ideological track record and work on behalf of the Trump administration, is a form of anti-Semitism in itself. Embracing victimhood is yet another example of the kind of Jedi mind trick Mr. Miller regularly engages in to win arguments. It won’t work. Everyone knows a scoundrel when they see one.

We’ve reached a point in our politics when someone with ideas as odious as Stephen Miller’s need only to hunker down if getting sacked means it would result in a partisan victory for the other side. Being a white nationalist no longer means ever having to say you’re sorry. The revelations about Mr. Miller that would’ve been shocking in any other era, have already receded into the dustbin of last week’s news cycle.

Stephen Miller may be a white nationalist, but that’s not a big deal in Donald Trump’s White House, where bigotry is just another lifestyle choice. What matters to Mr. Trump is loyalty to his cult of personality above all things, including white supremacy. As long as Mr. Miller can keep his hood on straight and remember who’s calling the shots in the whitest White House in American history, everything should be all right.