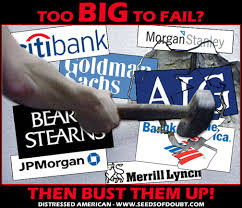 March 7, 2013 – For years, the Obama Administration has been pummeled for failing to bring criminal charges against a single major Wall Street bank or a single leading Wall Street banker for what the FBI termed an “epidemic of fraud” that blew up the entire economy.  Investigations revealed the banks committed routine fraud in peddling mortgage securities they knew were garbage, trampled basic property laws, laundered money from Iran, Libya and Mexican drug lords, conspired to game the basic measure of interest rates and more.  Yet, time after time, the Justice Department and regulatory agencies settled for sweetheart deals, with no admission of guilt, no banker held accountable, and fines that were the equivalent in earnings of a speeding ticket to the average family.

Yesterday Attorney General Holder stated openly what was already apparent.  The Justice Department believes that Too Big to Fail Banks are Too Big to Jail.  Criminal indictments against banks or leading bankers might endanger the economy and thus were too big a risk.

“I am concerned that the size of some of these institutions becomes so large that it does become difficult for us to prosecute them when we are hit with indications that if you do prosecute, if you do bring a criminal charge, it will have a negative impact on the national economy, perhaps even the world economy,” he said. “And I think that is a function of the fact that some of these institutions have become too large.”

Holder was responding to questions by Republican Senator Charles Grassley about why the Justice Department brought no criminal charges against the large British bank HSBC after it admitted laundering money for parties in Iran, Libya and Mexican drug lords.