Some 80 labor and civil rights activists, together with a few elected officials, gathered at dusk at the Beaver County Courthouse April 4 for a candlelight vigil. The somber but militant event commemorated the anniversary of the assassination of Dr. Martin Luther King, Jr. and protested the current efforts of rightwing PA Republicans to block citizens from voting in 2012. 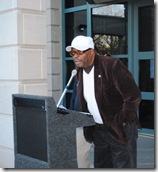 “They’re declaring war on us,” said Lynwood Alford, a member of the Beaver-Lawrence Central Labor Council and leader of the Minority Coalition. ‘Taking away our voting rights is taking away the little power we have in the fight for survival.”

Alford repeated the refrain several times as he introduced new speakers. The vigil was sponsored by the Beaver-Lawrence Central Labor Council, SEIU Local 668, the USW, and the Beaver County NAACP. The 12 CD Progressive Democrats of America also endorsed the vigil, and turned out a good-sized contingent.

The target of everyone’s anger was the passage into law of HB 934 last month, the so-called ‘Voter ID Law’.