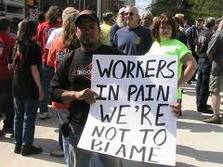 It was just a routine call to set up the logistics for weekend football watching and I was somewhat stunned by the response I got from my friend when I asked him how he was. “I am angry,” he said. About what? “Those (explicative) are not going to extend unemployment insurance.” I recalled that I had recently sent out a couple emails that used another expletive to describe the first vote in the lame duck Congressional session which didn’t reach the two-thirds majority needed to take emergency action to keep benefits going to nearly 2 million people unsuccessfully looking for work. “They really going to do it,” he said, reflecting the sudden, shocking awareness that that one third of the members of the U.S. House of Representatives were prepared to allow all those people – victims of an economic crisis not of their making – to face the holidays with no income.

The number of people who have been out of a job for more than six months is now 6.2 million. Congress has never cut off extended benefits when the unemployment rate was above 7.4 percent. It’s now at 9.6 percent.

“It is hard to believe, as the holidays approach yet again amid economic hard times, but Congress looks as if it may let federal unemployment benefits lapse for the fourth time this year,” the New York Times said editorially last week.

That’s something to get really mad about.

Any shrink will tell you that there’s not something necessarily bad about being angry; in fact, trying to repress being damn mad might not be good for you. Still, we are heading into the holiday season and the pressure is on to “be of good cheer.” Yet, all over the North “Atlantic Community,” situations are being described as “dickensonian,” a reference to Charles Dickens’s “A Christmas Carol.” The problem is despite being repeatedly reminded of our Judeo-Christian heritage, Scrooge seems to be getting the upper hand on Santa,
the Maccabeen insurgents and the Nazareth carpenter’s son.

The richest and most powerful nation on the planet somehow can’t afford to maintain an adequate educational system. College tuition costs go up, classes are cut and secondary school teachers are laid off while many of those who remain find themselves using their own money to buy reading materials and school supplies. More than 2.3 million homes have been repossessed by banks and mortgage lenders over the past three years; more than one million American households expected to have been foreclosed upon this year 2010.
About 40 percent of families facing eviction are renters whose landlords were foreclosed upon and the number of children displaced from their homes, schools and neighborhoods steadily increases.