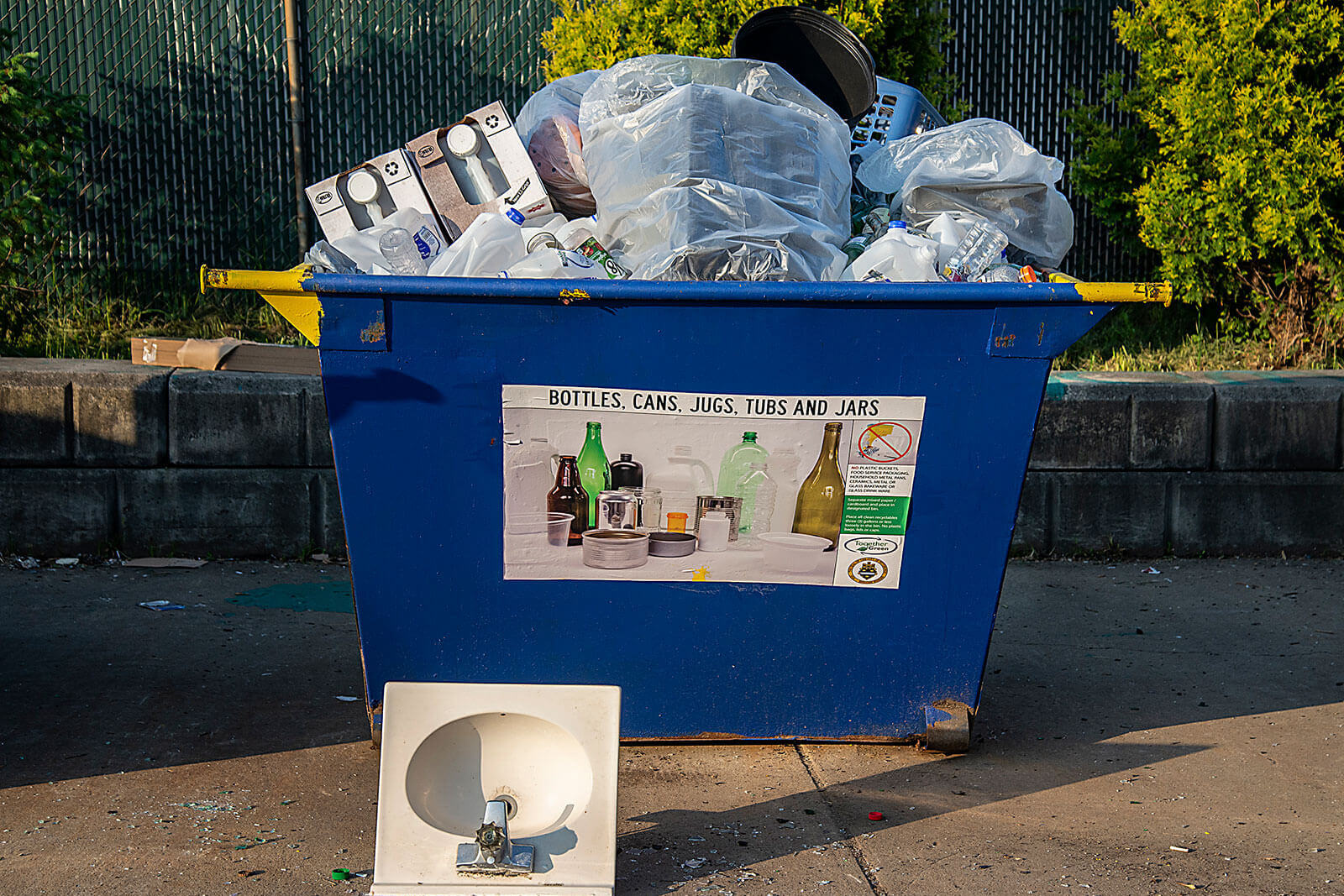 A recycling container in Construction Junction’s drop-off lot in North Point Breeze. The poster shows the bottles, cans, tubs, jugs and jars that can be recycled in the City of Pittsburgh. (Photo by Teake Zuidema/PublicSource)

From what’s being done to support electric vehicles and composting to how the Green New Deal would affect Pittsburgh’s historic buildings and churches, this Q&A covers it all.

Sept 18, 2019 – As part of the Covering Climate Now global reporting initiative, we asked you, our PublicSource readers, to tell us what you wanted to know about climate change in Pittsburgh. We selected six of your questions and answered them for you below.

1. Is there any chance of a plastic bag ban? How big of a difference would it make?

It’s difficult to evaluate chances for a plastic bag ban but the chances of it happening before 2021 are slim. Earlier this year, Pennsylvania Gov. Tom Wolf signed legislation that prevents municipalities from banning or taxing plastic bags until the end of 2020. In the interim, state agencies are researching the potential impact of such bans. Pittsburgh City Council unanimously opposed the legislation in a letter to Wolf on June 27.

Councilwoman Erika Strassburger said city council is looking into ways to decrease plastic bag consumption. If legislation is enacted at the city level after the end of 2020, a focus would be on equity, she said. “If there’s a [plastic bag] fee involved, we don’t want the burden to be on those who have the least ability to pay a fee,” Strassburger said.

Some local organizations and businesses are taking matters into their own hands.

Animal welfare organization HUMANE ACTION Pittsburgh, for example, started an initiative called “no plastic please” to encourage local residents and businesses to reduce their consumption of plastic. Although the initiative has broad community support, director Sabrina Culyba said getting retailers to opt in has been challenging. “A lot of businesses, their bottom line is at stake when it comes to making these switches,” she said. HUMANE ACTION Pittsburgh’s website lists participating restaurants and retailers.

Giant Eagle is currently conducting its own research on how to decrease the use of plastic bags in its stores. “Historically, Giant Eagle’s focus has been on recycling… But as an organization committed to our communities and our planet, we recognize that we have a responsibility to do more,” Dan Donovan, director of corporate communications, wrote in an email to PublicSource.

In a 2019 report by the environmental campaigning organization Green Peace on grocery store chains and plastic pollution, Giant Eagle scored poorly; it was ranked No. 16 out of 20 retailers for its overall practices regarding single-use plastics. Giant Eagle operates nearly 500 grocery and convenience stores.

While reducing plastic bags is one step toward sustainability, it’s not a fix-all solution. Sustainable Pittsburgh, a nonprofit organization that promotes sustainable development in the region, is facilitating cross-sector conversations on how to tackle the problem of single-use plastics in the region. “It’s going to take more conversations to figure out what we can do here,” Executive Director Joylette Portlock said. “Because it’s not just straws, and it’s not just plastic bags.”

And, reusable bags aren’t a perfect solution. Studies show that the environmental impact of producing one reusable bag is the same as producing 131 plastic bags.

2. How much interest or investigation has there been into starting a compost waste program in the city?

The City of Pittsburgh accepts yard debris and Christmas trees at certain drop-off locations, but does not provide disposal of other forms of organic waste. Department of Public Works Director Mike Gable wrote in an email to PublicSource that the idea of a citywide compost program is being discussed, but no plans have been made yet. The City’s “Zero Waste” program aims to divert 90% of waste from landfills by 2030.

The absence of a citywide compost program isn’t due to a lack of interest. Laura Codori, founder of the local vermicompost company Worm Return, said she often gets calls from people asking if there is a compost drop-off site or pickup service. “People want to do this,” Codori said. She recently co-proposed a compost drop-off program to the Department of Innovation with Anthony Stewart of the environmental consulting firm DECO Resources.

3. If the Green New Deal or a similar proposal were to be enacted, what would that mean for Pittsburgh’s historic buildings and churches?

While the version of the Green New Deal that was struck down by the Senate in March doesn’t address historic buildings specifically, it does call for “upgrading all existing buildings in the United States.” However, buildings with historic designation are exempt from the International Building Code’s energy code at this time. They’re not subject to the same energy standards. It’s hard to say if, or how, future legislation could change that. END_OF_DOCUMENT_TOKEN_TO_BE_REPLACED