HARRISBURG, Oct. 15, 2014 – State Sen. Christine M. Tartaglione today helped to quash a backdoor attempt to weaken unions by joining a bipartisan push to defeat an amendment that would have prohibited employers from automatically deducting membership dues from a worker’s paycheck.

Called “paycheck protection” by proponents, Tartaglione said the proposal, introduced by Sen. Scott Wagner (R-York) as an amendment to a bill designed to help children with food allergies, was not democratic.

“The only thing Sen. Wagner’s amendment would do is eliminate unions’ abilities to choose who they want to represent them in government,” Tartaglione said. “It would eliminate the voices of the men and women who work hard day-in and day-out to put food on the table for their families, just because they belong to a union.

“Union members can already decide whether or not they want to contribute to union political spending. The law protects them if they choose not to contribute.  And, she said, for every hour worked by a teacher, the money they earn for that work is no longer the state’s money; it is the employee’s.

“So, I ask you: why do we call this measure ‘paycheck protection?’” she said on the Senate floor.

Tartaglione added that voting in favor of the Wagner amendment would have handed control of the commonwealth to corporations “and their one-sided political agendas.” 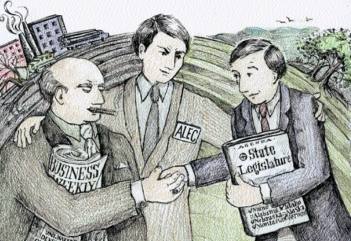 Oct. 17, 2014 – It had all the trappings of an ALEC-backed attack on democracy:  Push out a bill prohibiting local governments from passing workplace protections in their own communities. If all else failed, tack the measure onto some popular bill as an amendment and hope the supporters of that bill would want it badly enough to allow the hostile amendment to stand.

Only this time the strategy didn’t work, thanks to the strong stand of progressive legislators and the smart organizing of a broad coalition – particularly the leadership of anti-violence advocates.

In this case, the state was Pennsylvania. The preemption attempt was aimed at stopping future passage of a municipal paid sick days ordinance. And the popular bill held hostage was one to aid those who experience domestic violence.

First Rep. Seth Grove, a member of the American Legislative Exchange Council or “ALEC,”  tried to pass a stand-alone bill that would take away the right of local units of government to pass laws ensuring workers could earn paid sick days – or even unpaid leave. Other legislators added multiple amendments to the bill that would have required every elected official to take votes that might have been unpopular with their constituents. The measure didn’t move.

So another ALEC member, John Eichelberger, decided to try a different tack:  stick the preemption provision as an amendment onto a bipartisan bill to help those experiencing domestic violence.  HB 1796 was written to exempt victims of domestic violence from “nuisance ordinances” that allow landlords to evict those who call 911 more than a certain number of times within a given period. The bill had passed the House with broad bipartisan support.