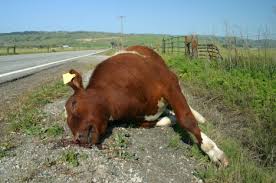 The death toll is insignificant when measured against the nation’s livestock population (some 97 million beef cattle go to market each year), but environmental advocates believe these animals constitute an early warning.

Exposed livestock “are making their way into the food system, and it’s very worrisome to us,” Bamberger says. “They live in areas that have tested positive for air, water, and soil contamination. Some of these chemicals could appear in milk and meat products made from these animals.”

In Louisiana, 17 cows died after an hour’s exposure to spilled fracking fluid, which is injected miles underground to crack open and release pockets of natural gas. The most likely cause of death: respiratory failure.

In New Mexico, hair testing of sick cattle that grazed near well pads found petroleum residues in 54 of 56 animals.

In northern central Pennsylvania, 140 cattle were exposed to fracking wastewater when an impoundment was breached. Approximately 70 cows died, and the remainder produced only 11 calves, of which three survived.

In western Pennsylvania, an overflowing wastewater pit sent fracking chemicals into a pond and a pasture where pregnant cows grazed: Half their calves were born dead. Dairy operators in shale-gas areas of Colorado, Pennsylvania, West Virginia, and Texas have also reported the death of goats.

Drilling and fracking a single well requires up to 7 million gallons of water, plus an additional 400,000 gallons of additives, including lubricants, biocides, scale- and rust-inhibitors, solvents, foaming and defoaming agents, emulsifiers and de-emulsifiers, stabilizers and breakers. At almost every stage of developing and operating an oil or gas well, chemicals and compounds can be introduced into the environment. Cows Lose Weight, Die

After drilling began just over the property line of Jacki Schilke’s ranch in the northwestern corner of North Dakota, in the heart of the state’s booming Bakken Shale, cattle began limping, with swollen legs and infections. Cows quit producing milk for their calves, and they lost from 60 to 80 pounds in a week and their tails mysteriously dropped off. Eventually, five animals died, according to Schilke.

Although her steers currently look healthy, she says, “I won’t sell them because I don’t know if they’re okay.”

Nor does anyone else. Energy companies are exempt from key provisions of environmental laws, which makes it difficult for scientists and citizens to learn precisely what is in drilling and fracking fluids or airborne emissions. And without information on the interactions between these chemicals and pre-existing environmental chemicals, veterinarians can’t hope to pinpoint an animal’s cause of death.

The risks to food safety may be even more difficult to parse, since different plants and animals take up different chemicals through different pathways.

“There are a variety of organic compounds, metals, and radioactive material [released in the fracking process] that are of human health concern when livestock meat or milk is ingested,” Motoko Mukai, a veterinary toxicologist at Cornell’s College of Veterinary Medicine, says. These “compounds accumulate in the fat and are excreted into milk. Some compounds are persistent and do not get metabolized easily.”

Veterinarians don’t know how long chemicals may remain in animals, farmers aren’t required to prove their livestock are free of contamination before middlemen purchase them, and the Food Safety Inspection Service of the U.S. Department of Agriculture isn’t looking for these compounds in carcasses at slaughterhouses.

Documenting the scope of the problem is difficult: Scientists lack funding to study the matter, and rural vets remain silent for fear of retaliation. Farmers who receive royalty checks from energy companies are reluctant to complain, and those who have settled with gas companies following a spill or other accident are forbidden to disclose information to investigators. Some food producers would rather not know what’s going on, say ranchers and veterinarians.

Schilke ranch cow that has lost its tail, one of many ailments found in cattle following hydrofracturing of the Bakken Shale in North Dakota (Photo by Jacki Schilke)

“It takes a long time to build up a herd’s reputation,” rancher Dennis Bauste of Trenton Lake, North Dakota, says. “I’m gonna sell my calves and I don’t want them to be labeled as tainted. Besides, I wouldn’t know what to test for. Until there’s a big wipe-out, a major problem, we’re not gonna hear much about this.”

Fracking proponents criticize Bamberger and Oswald’s paper as a political, not a scientific, document. “They used anonymous sources, so no one can verify what they said,” says Steve Everley, of the industry lobby group Energy In Depth. The authors didn’t provide a scientific assessment of impacts—testing what specific chemicals might do to cows that ingest them, for example—so treating their findings as scientific, he continues, “is laughable at best, and dangerous for public debate at worst.”

The National Cattlemen’s Beef Association, the main lobbying group for ranchers, takes no position on fracking, but some ranchers are beginning to speak out. “These are industry-supporting conservatives, not radicals,” says Amy Mall, a senior policy analyst with the environmental group, Natural Resources Defense Council. “They are the experts in their animals’ health, and they are very concerned.”

Last March, Christopher Portier, director of the National Center for Environmental Health at the U.S. Centers for Disease Control and Prevention, called for studies of oil and gas production’s impact on food plants and animals. None are currently planned by the federal government.

As Local Food Booms, Consumers Wary But consumers intensely interested in where and how their food is grown aren’t waiting for hard data to tell them their meat or milk is safe. For them, the perception of pollution is just as bad as the real thing.

“My beef sells itself. My farm is pristine. But a restaurant doesn’t want to visit and see a drill pad on the horizon,” Ken Jaffe, who raises grass-fed cattle in upstate New York, says. Only recently has the local foods movement, in regions across the country, reached a critical mass. But the movement’s lofty ideals could turn out to be, in shale gas areas, a double-edged sword.

Should the moratorium on hydrofracking in New York State be lifted, the 16,200-member Park Slope Food Co-op, in Brooklyn, will no longer buy food from farms anywhere near drilling operations—a $4 million loss for upstate producers. The livelihood of organic goat farmer Steven Cleghorn, who’s surrounded by active wells in Pennsylvania, is already in jeopardy.

“People at the farmers market are starting to ask exactly where this food comes from,” he says.

This report was produced by the Food and Environment Reporting Network, an independent investigative journalism non-profit focusing on food, agriculture, and environmental health. A longer version of this story appears on TheNation.com

19 thoughts on “Western PA Cows in Trouble, Too”