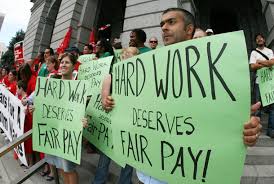 END_OF_DOCUMENT_TOKEN_TO_BE_REPLACED

Activists are mobilizing around President Obama’s call to raise the minimum wage to $9.00, and polling shows that Americans across the political spectrum agree with such a policy.

But here’s an interesting fact about what the minimum wage could be instead. The Center for Economic and Policy Research’s John Dewitt looked at what the minimum wage would be if it simply rose with productivity — that is, if workers were actually paid for the increasing amount of output — since 1968, and found that it would be almost 3 times what it is now:

Even Obama’s modest plan to raise the minimum wage is expected to face intense opposition from Big Business and its lobbyists.

Nine Economic Facts That Will Make Your Head Spin

Feb 18, 2013  |  How much will you need for medical expenses in retirement? What does it cost to keep 2.5 million Americans behind bars? Here are a few facts and figures that might surprise you.

1. Recovery for the rich, recession for the rest.

Economic recovery is in rather limited supply, it seems. Research by economist Emmanuel Saez shows that the top 1 percent has enjoyed income growth of over 11 percent [3] since the official end of the recession. The other 99 percent hasn’t fared so well, seeing a 0.4 percent decline in income.

The top 10 percent of earners hauled in 46.5 percent of all income in 2011, the highest proportion since 1917 – and that doesn’t even include money earned from investments. The wealthy have benefitted from favorable tax status and the rise in stock prices, while the rest have been hit with a continuing unemployment crisis that has kept wages down. Saez believes this trend will continue in 2013.

2. Half of us are poor or barely scraping by.

The latest Census Bureau data shows that one in two Americans currently falls into either the “low income” category or is living in poverty. Low-income is defined as those earning between 100 and 199 percent of the poverty level. Adjusted for inflation, the earnings for the bottom 20 percent of families have dropped from $16,788 in 1979 to just under $15,000. Earnings for the next 20 percent have been stuck at $37,000.

States in the South and West had the highest proportion of low-income families, including Arizona, New Mexico and South Carolina, where politicians are eagerly shredding the social safety net.

END_OF_DOCUMENT_TOKEN_TO_BE_REPLACED

And The American Warehouse

JOLIET, Ill., and FONTANA, Calif. — Like nearly everyone else in Joliet without good job prospects, Uylonda Dickerson eventually found herself at the warehouses looking for work.

"I just needed a job," the 38-year-old single mother says.

Dickerson came to the right place. Over the past decade and a half, Joliet and its Will County environs southwest of Chicago have grown into one of the world’s largest inland ports, a major hub for dry goods destined for retail stores throughout the Midwest and beyond. With all the new distribution centers have come thousands of jobs at "logistics" companies — firms that specialize in moving goods for retailers and manufacturers. Many of these jobs are filled by Joliet’s African Americans, like Dickerson, and immigrants from Mexico and elsewhere in Latin America.

But many bottom-rung workers like Dickerson don’t work for the big corporations whose products are in the warehouses, or even the logistics companies that run them. They go to work for labor agencies that supply workers like Dickerson. Last year, she found work as a temp through one of the myriad staffing agencies that serve big-box retailers and their contractors. Thanks largely to the warehousing boom, Will County has developed one of the highest concentrations of temp agencies in the Midwest.

Dickerson, grateful to have even a temp job, was taken on as a "lumper" — someone who schleps boxes to and from trailers all day long. As unglamorous as her duties were, Dickerson became an essential cog in one of the most sophisticated machines in modern commerce — the Walmart supply chain. Walmart, the world’s largest private-sector employer, had contracted a company called Schneider Logistics to operate the warehouse. And Schneider, in turn, had its own contracts with staffing companies that supplied workers.

END_OF_DOCUMENT_TOKEN_TO_BE_REPLACED 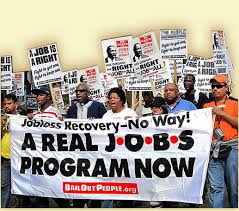 END_OF_DOCUMENT_TOKEN_TO_BE_REPLACED

He made about $30,000 as a social worker for nonprofits, and she collected Social Security medical disability benefits. They weren’t rich, but with three children at home, they got by — until he lost his job not long after they became homeowners.

As David Vaughn, 38, tried for years to find work in his field, the family struggled to save their home from foreclosure. They finally found a buyer for it in September. Now, they rent from her sister.

"We’re looking to see how we can get things back to normal," Deidra Vaughn, 31, said last week as she stocked up on groceries at the North Hills Community Outreach food pantry. "I’d like to see my husband back in his field, hopefully, when the economy gets better. Every day is a struggle."

Poverty — which federal guidelines define as having income of $26,170 or less annually for a family of five — once was widely associated with inner-city communities, but during the nation’s economic downturn, it infiltrated more middle-class neighborhoods. A Brookings Institution analysis of census data showed that from 2000 to 2010, the number of poor individuals in suburbs grew 53 percent, compared with 23 percent in cities.