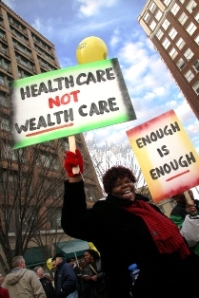 The legacy of the Bush Administration has been a perfect storm of economic devastation — in finance, housing and jobs.  The challenge of fixing this economic mess is enormous – and urgent.  Creating good jobs that cannot be outsourced is central to the solution.

Despite much-touted “green shoots,” the prognosis for the U.S. economy keeps getting worse.  The official unemployment rate hit 9.5 percent in June and is likely to exceed 10 percent by later this year and remain high throughout 2010 – when mid-term elections will take place.  We have lost an extraordinary 6.5 million jobs since the onset of the recession, and we are 8.8 million jobs short of where we should be, taking into account the growing working age population.

This is the sharpest loss of jobs and the greatest increase in unemployment of any downturn since the 1930s — and we have not yet hit bottom.  Rapidly rising unemployment has devastated millions of families and their communities, and its consequences for the quality of bank assets, particularly home mortgages, threatens what progress has been made in stabilizing our financial system.

Of course, the official unemployment rate does not even begin to tell the whole story: stagnant wages and falling hours, discouraged workers, long-term unemployment, and spikes for particular sectors and population groups all contribute to the depth and breadth of the labor-market crisis we are facing.  As Lawrence Mishel of the Economic Policy Institute (EPI) told the Washington Post recently, “There is a ton of pain in the pipeline.”

The number of workers who have given up looking for a job or who have been forced to settle for a part-time job is reaching record proportions, with 16.5 percent of workers under-employed or unemployed in June — more than 25 million workers.  Almost 30 percent of unemployed workers have been out of work more than six months, and more than 600,000 will exhaust their unemployment benefits by September if nothing is done.

The job losses are spread throughout the economy – and so is the pain.  Since the recession began in December 2007, we have lost 1.9 million manufacturing jobs and 1.3 million construction jobs – often the most vulnerable sectors in an economic downturn.  But unlike past recessions, the job losses are not confined to a few sectors.  1.5 million jobs have been lost in professional and business services, as well as almost 400,000 in transportation and another 848,000 in temporary help services.  Fourteen states already have unemployment rates over 10 percent.

Those lucky enough to have jobs are not escaping the adverse impact of the downturn.  High unemployment has hammered wages, which grew at only a 1.4 percent annual rate over the last six months, while weekly earnings actually fell because of shorter work hours.  Wage cuts and unpaid furloughs are occurring in many workplaces, and some employers have stopped contributing to their pension plans.  As the recession continues and unemployment stays high, it can be expected that wages for most workers will not keep pace with inflation in the near future.

The toll of unemployment, underemployment, retrenched work hours and eroded wages will be broad-based declines in family income and increased poverty and economic distress.  It will be several years before incomes return to their pre-recession level of 2007 — already a disappointingly low level because of the weakness of the last “recovery.”

It is crystal clear that urgent action from the federal government is needed to boost economic growth and jobs, and invest in America’s future: we need a second installment on the Obama Administration’s economic recovery program, and this second installment must focus like a laser beam on job creation.  This is not the time to fret about budget deficits or inflation.  It is entirely appropriate to enact policies that will temporarily increase fiscal deficits for a year or two in order to generate jobs and income during this economic crisis.  At this critical juncture, the consequences of the government failing to act on a sufficient scale and in the right way could be catastrophic.

The American Recovery and Reinvestment Act (ARRA) was a bold and well-crafted program to generate and save jobs, to provide social supports for those in need and to lay the foundation for future growth.  It has already started delivering and is on track to generate roughly three million jobs and to lower unemployment by up to two percentage points.

Unfortunately, because of the confluence of so many long-term negative trends in place for many years, the economy and the labor market have seriously deteriorated since the ARRA was designed, and the original economic recovery plan is no longer sufficient.  Last November the blue-chip consensus was for 7.7 percent unemployment at the end of 2009.  By March, the consensus forecast was for 9.2 percent unemployment in late 2009, despite the passage of a much larger stimulus than expected in November.  Clearly, the economy the Obama Administration inherited was in deep trouble and in even worse shape than generally realized in the spring.

This recession is global, so a coordinated global response is crucial to any successful recovery.  The U.S. government must show leadership in the international G-8 and G-20 meetings to insist that the major economies come together and agree on coordinated fiscal stimulus and a coherent financial regulation strategy.

Since the onset of the recession, U.S. households have lost $14 trillion in wealth from the collapse of the housing bubble and the erosion in stock values – approximately an entire year’s output.  Dean Baker of the Center for Economic and Policy Research estimates that our economy now faces a demand shortfall of $2.6 trillion over this year and next.  The ARRA is simply too small to fill a hole this big in the economy, and no amount of waiting and false optimism will change that uncomfortable economic fact.

Our growth model in recent decades—debt-financed consumer spending and asset bubbles, combined with huge trade deficits—has failed.  We cannot borrow and outsource our way to prosperity: without good jobs in America, there will be no sustainable economic recovery.  As private demand pulls back and Americans rebuild their savings, the most effective path to sustainable growth is an ambitious public investment agenda.

There is no viable alternative to public investment right now. In the private sector, consumer demand will continue to be depressed by unemployment, stagnant wages, and the erosion of stock market and housing wealth.  Exports will not be a source of growth because global demand is plummeting and the dollar is still overvalued.  Meanwhile, the Federal Reserve’s reductions of short-term interest rates have failed to spark a recovery, and taxpayers ended up saving much of the tax cuts that were included in the last two stimulus bills rather than spending them.  It will require public investment and other spending to boost demand and create jobs directly.  This must also be coupled with efforts to ensure that credit is made available to manufacturing interests to help stimulate production and job creation.

Concerns over inflation are unwarranted.  The most recent reports indicate that inflation is stabilizing at a level near zero, and on June 24th the Federal Reserve predicted that inflation will remain “subdued for some time.”

Concerns over budget deficits are exaggerated, especially for consideration of policies that will increase deficits only in the short-term.  An effective economic recovery package will boost growth (and tax revenues), while also increasing future productivity and competitiveness.

The challenge is to mitigate the rise in unemployment, lessen the adverse impact of the downturn on those affected, and generate good jobs to ensure a robust recovery.  At the same time, we should rebuild and modernize our crumbling infrastructure and revitalize our manufacturing sector, while ensuring that our public sector can provide the services we count on to keep our communities safe and our families healthy.

This can be accomplished in a number of ways.

We should extend unemployment benefits immediately, by at least seven weeks, to help the hundreds of thousands of workers who would otherwise exhaust their benefits in the near term.  We should also increase food stamp spending as needed to help families cope with the downturn.

We should increase aid to state and local governments.  We also need to bolster the financial stability of independent government agencies such as the U.S. Postal Service.  As states and local governments cut back spending and jobs to balance their budgets, they are exacerbating the recession—offsetting the ARRA—undercutting future growth, failing to assist vulnerable families, and leaving our communities less safe and secure.  The Center on Budget and Policy Priorities (CBPP) calculates the shortfall of state budgets at $350 billion for 2009 through the first half of 2011, leaving a shortfall of $210 billion after passage of the ARRA.  Goldman-Sachs projects that state actions to adjust their budgets will penalize national growth over the next twelve months by 0.6-0.7%.

State cutbacks threaten vital services and jobs, including health and education, police and firefighting, transportation and other public services.  According to CBPP, at least 21 states are cutting health insurance or services for low-income children and families; at least 24 states are cutting or proposing to cut K-12 and early education; at least 32 states have implemented cuts to public colleges and universities.  In addition, at least 41 states and the District of Columbia are cutting hours and jobs for state government employees.

We should increase spending for needed infrastructure and clean energy projects, even for those projects with a time horizon longer than two years.  Every billion dollars invested in transportation systems and infrastructure puts 30,000 people to work.  New investments in aviation, highways, mass transit, rail, ports and waterways will stimulate major job creation, improve our deteriorating infrastructure, and support U.S. manufacturing and production jobs. To the absolute maximum extent possible, we should ensure that we use American-made inputs and manufactured goods in all recovery-funded projects.  We should be neither defensive, nor apologetic, for using the Buy American provisions supported by the American public and legislated by the Congress.  As President Obama has said, we need sustained public investment-led growth to restore our country’s competitiveness.  But no investment plan will succeed if we don’t make more of what we buy here at home.

And we should look to historical precedent for other effective and successful job creation examples.  The Works Progress Administration, led by Harry Hopkins during the Roosevelt Administration, put 3.4 million Americans to work in one year – 1935 – in thousands of projects that had a lasting impact on our national life.  Such an effort can be developed to provide employment in distressed communities.

President Roosevelt’s strategy can be re-engineered to help revitalize the modern manufacturing sector.  Today’s unemployed can be put to work renovating factories and public structures and installing new equipment.  New financing and marketing plans for local manufacturers should also be developed to support domestic production and jobs.

And to revitalize our industrial base, we must also invest in our technical knowledge base.  Two years of technical training should be offered to recent high school graduates and recently unemployed adults.  Tuition at community colleges, universities and technology institutes should be subsidized by the federal government, as it was after World War II.  Every American worker should be given the opportunity to acquire the skills and education he or she needs to reach peak potential.

We must act decisively at this critical moment in time.  We must meet the considerable challenges we face with actions on a scale appropriate to the crisis, while also keeping in mind the kind of economy and country we hope to build for our children.