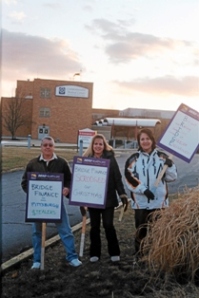 Why is a major Chicago financial group with millions once again behaving like a low-life deadbeat, needing to be dunned for payment by the hospital workers it owes, and who have very little?

That’s the question that sent Aliquippa’s former employees of the Commonwealth Medical Center back to the shutdown hospital Feb 16 for a candlelight vigil and nighttime march through neighborhood streets. About 50 nurses and staff, fired last December, braved freezing weather to demand, once again, their full back wages. About two weeks earlier, after a brief sit-in in the facility, they got about half their money, with the other half promised within weeks. The promise proved empty, if not deceitful.

“Our original idea for this event was low-key,” said Linda Graham, an SEIU staffer at the start of the vigil. “We saw it as a way to get together with our allies in the community and thank them, while looking to the future. We thought the issue of our wages was over. But now we’re angry all over again, having to fight once more for what’s rightfully ours.”

Michelle Batchelor, one of the workers, opened the vigil with a prayer. She touched on a theme that moves this entire distressed steel town deeply-that this community is in need of a health care facility and this one, a gift from the Jones and Laughlin steelworkers back in the 1970s has been shuttered by a combination of greed and the crisis brought on by de-industrialization. She thanked the workers who had gone before, and urged a wider solidarity to set things right.

“We will not go away, we will not lie down and die,” added Johnnie Thomas, a quality control worker. She explained that the hospital managed to function for years as a nonprofit, but when it was taken over and turned into a for-profit, it was closed within a year after a string on false promises and deception. Bought by Bridge Finance in Chicago, executives and security staff were ordered to be paid in bankruptcy court, but the 250 nurse and staff were cheated out of their last two weeks pay.

“It was an incredible hardship for us to be told on Dec. 12 that we would get no checks, even though we were compelled to work,’ said one nurse. “We had to deal with the whole month of December with zero income.”

Neil Bisno, president of SEIU Healthcare Pennsylvania, explained that Bridge representatives in the last court session claimed it was simply “good business” that they would pay up, half the next day, the other half by mid-February. “Now they’re going into court with their last schedule of payments, and we’re not even mentioned.” The workers were urged to fill the courtroom in Pittsburgh the following morning, Feb. 17.

At the close of the vigil, the Local 1199 leaders invited Joe Spanik, Beaver County Commissioner, to take the bullhorn. Spanik, a local Democrat with a labor background, has been on every picket line and rally in this struggle.

“One way or another, we are going to open this hospital again,” said Spanik. “It’s a good facility, and it has excellent workers and staff. The Aliquippa community and the entire Beaver County south side need it. We’ll settle the pay issue, and bring it back.” He noted that Dennis Rousseau, a leader of the Carpenter’s Union, was also there in solidarity, then joined the long file of workers as it wound through the New Sheffield area to the MT Carmel Presbyterian church were, after a round of hot chocolate, the workers dispersed to prepare for the courtroom battle the next day.

[Carl Davidson also serves as webmaster for ‘Progressives for Obama’ if you like this article, go to the http://progressivesforobama.net site and make use of the PayPal button.]

Email to a Friend